Please ensure Javascript is enabled for purposes of website accessibility
Log In Help Join The Motley Fool
Free Article Join Over 1 Million Premium Members And Get More In-Depth Stock Guidance and Research
By Timothy Green - Jan 6, 2016 at 10:30AM

What: Shares of NVIDIA (NVDA -2.50%) soared in 2015, rising by 64.4%, according to S&P Capital IQ data. All of these gains came in the second half of the year, driven by NVIDIA's strong earnings despite a weak PC market. 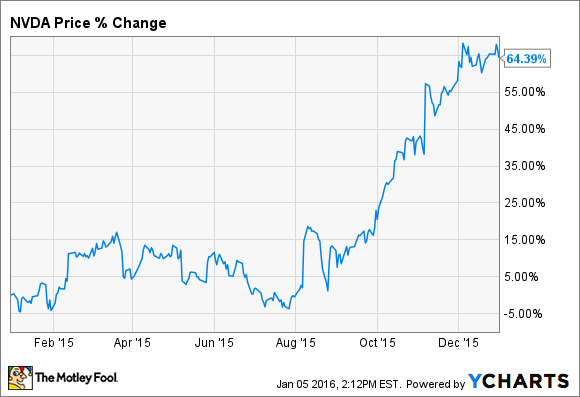 So what: In May, NVIDIA reported mixed first-quarter earnings, providing revenue guidance that was well below expectations. NVIDIA's actual second quarter results, reported in August, blew past this guidance, with GPU sales rising by 9% year over year despite global PC shipments slumping 11.8% during the second quarter.

These strong results sent the stock soaring, and NVIDIA's third-quarter results were just as strong. GPU sales rose by 12% year over year in the third quarter, and NVIDIA's revenue and earnings came in well ahead of analyst expectations. The PC market remained weak, with shipments falling by 10.8% year over year, but this had no discernible effect on NVIDIA's gaming GPU business.

One thing helping NVIDIA perform well despite a weak PC market was market share gains at the expense of rival Advanced Micro Devices (AMD -0.93%). Prior to late 2014, NVIDIA had maintained a roughly 60% share of the discrete graphics card market. The company's share had risen to around 80% by the middle of 2015, driven by NVIDIA's disruptive Maxwell architecture and AMD's lack of competitive products at the high-end of the market. AMD finally launched new graphics cards in June of 2015, but the damage had been done.

Now what: With the same kind of market share gains unlikely to occur in 2016, and with NVIDIA stock trading for 25.6 times trailing-12-month earnings after backing out the company's net cash, NVIDIA's earnings may need to catch up to its valuation. The company has a variety of growth initiatives, including Tesla, its GPU aimed at supercomputers and high-performance-computing, and Tegra, its mobile SoC aimed mainly at automotive applications, but gaming GPUs are still the core of the company. NVIDIA is expected to report its fiscal fourth-quarter earnings in early February.