What: Shares of The Container Store Group (NYSE:TCS) were falling apart last year, dropping 57% according to data from S&P Capital IQ. The organization-themed retailer has consistently disappointed the market, and as a result, investors took the stock to the woodshed in the latter half of the year. The chart below tells the tale. 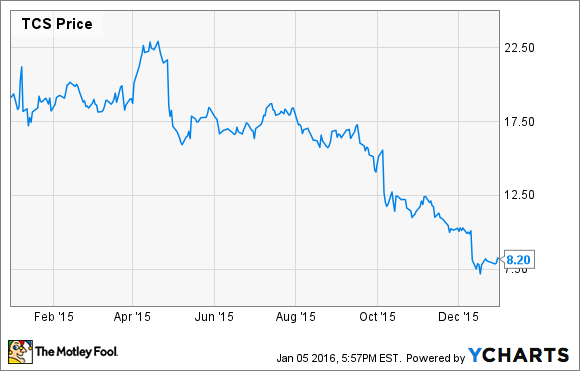 So what: In its short history as a publicly traded company, The Container Store has done nothing but underwhelm. It now trades for under $8 after peaking at over $40 two years ago just after its IPO.

The pain started early for The Container Store as the stock fell 14% following a disappointing report and scaled back guidance for the year. Earnings per share of $0.07 met expectations, but the company was short on the revenue side, posting $190.9 million against estimates of $200.4 million. At the time, management projected full-year earnings per share of $0.41 to $0.44.

After the stock recovered from that hit, the next earnings report brought more of the same. Shares again fell about 14% after the company came up short in the all-important holiday period. Management blamed winter storms as net income fell 29% to $0.24 per share, well short of the $0.31 analysts had expected. Since the company makes the majority of its profit in the fiscal fourth quarter, that period is especially important.

The stock traded uneventfully for the next several months but tanked again in the October earnings report. This time the stock fell 19% in the single session following its earnings release. Sales barely grew in the period, inching up 1.2% year-over-year to $195.5 million, while same-store sales increased just 0.1%. Earnings of $0.06 missed estimates by a penny as profits fell 62% from a year ago due to rising costs.

Now what: The Container Store's next earnings report is expected in the next week, but there's little reason for enthusiasm. The thesis that encouraged its IPO and drove shares higher in the aftermath is broken. The company's store expansion plan is useless without meaningful profits, and it has no competitive advantage as a small niche company up against behemoths like IKEA. Analysts have claimed that its employee-first culture is a positive, but that has resulted in higher costs in an industry where customer service may not be as valuable as management would like to think. Analysts expect profits to grow slightly this year, but given the company's track record, I wouldn't be surprised to see it continue to come up short.