The burger chain bounced on excitement for its plan to refranchise stores and buy back shares.

What: Shares of The Wendy's Company (WEN -1.75%) kept their positive momentum through 2015, finishing up 19% according to data from S&P Capital IQ. As the chart below shows, the gain was not a steady one, but a rally toward the end of the year ensured gains for shareholders. 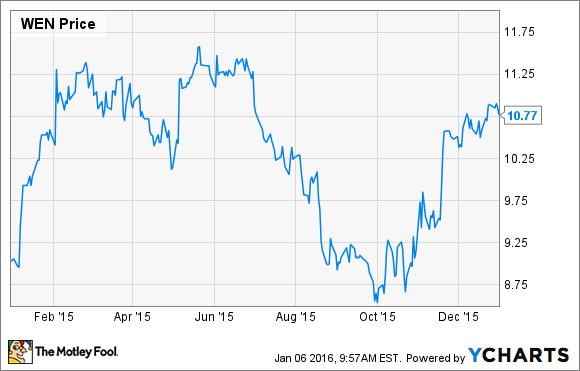 So what: Riding a wave that lifted other legacy fast-food giants including McDonald's Corp. and Burger King, now owned by Restaurant Brands International, Wendy's delivered steady comparable-sales growth throughout the year, continued its comeback, and had investors applauding its refranchising plans.

Wendy's shares jumped out of the gate as weakness from McDonald's, lower oil prices, and optimism about its fourth-quarter earnings report seemed to buoy stock, with shares finishing up 17% in January.  The rally culminated in a 9% gain on Feb. 3 as the company delivered an adjusted profit of $0.10 a share, meeting estimates while revenue came up short. However, investors sent the stock soaring on news that the company planned to sell another 500 restaurants, fitting with its plans to lower its costs and free up capital. Its previously announced goal is to own just 5% of its restaurants by the middle of 2016.

The stock got another boost following its first-quarter earnings report as company-operated restaurant margin improved 160 basis points to 14.7% and it said it would sell its bakery operations in the second quarter. Finally, management projected earnings-per-share growth in the high single digits in 2016 and 2017 and growth in the mid to high teens in 2018.

In June, Wendy's wowed investors once again with a promise buyback $1.4 billion worth of its shares by the end of 2016, or the equivalent of one-third of its market cap. Shares began slipping at the end of June after the company completed its tender offer, buying back 66.5 million shares. After falling to below $9, its 2014 closing price, the stock rallied at the end of the year with the help of a solid third-quarter earnings report.

Now what: Wendy's shares remain highly priced, carrying a price-to-earnings ratio above 30. Though investors are enthusiastic about the buyback program and refranchising plan, this is ultimately a low-growth stock, and the price may have become divorced from the underlying business. Management same-store sales growth of 2.5%-3% over the coming years, and analysts project only a modest improvement in EPS for 2016. Considering that, promises of EPS growth in the mid to high teens may be hard to deliver on.