Some highlights from 2015 for two of Ford's most popular vehicles in the U.S.

If you had to guess which two Ford Motor Company (F 2.27%) products would steal the hearts of consumers, what would your guesses be? It wouldn't shock me if most Americans guessed the F-150 and the iconic Mustang -- essentially the heart and soul of the Blue Oval's vehicle lineup.

That was evident when Edmunds.com announced that the Mustang and F-150 took home two of its Most Popular awards, which are based on what vehicles consumers most researched and therefore reflect what vehicles car buyers are most focused on purchasing. Indeed, the F-150 and Mustang are extremely popular; here are some highlights from their stellar 2015.

F-150 wins in 2015
It wasn't long ago when investors, journalists, and analysts all wondered if Ford was taking too big a risk developing its next-generation F-150 using aluminum body panels. People openly questioned if the process would lead to more expensive repairs and a less-tough brand image -- quite important for full-size trucks.

What people can't question, though, is that Ford's F-150 sold extremely well once production reached full capacity in mid- to late 2015. 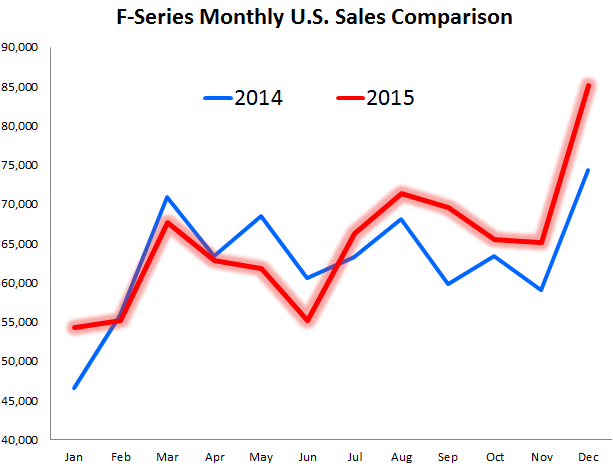 To help put last month's extraordinary sales performance in perspective, consider that in the 72 months since 2010, the F-Series only topped 72,000 units in one month three times (including last month) and Ford has said that any month above 50,000 is a solid sales figure. In fact, you would have to go back a decade to find the last month F-Series sales topped 85,000.

Ford's F-Series has been America's best-selling truck for 39 straight years, and the nation's best-selling vehicle overall for the past 34, so winning most popular on Edmunds.com shouldn't surprise anyone.

Mustang sales accelerate
During the redesign process of the 2015 Mustang, Ford knew it had to shake things up to try to revive sales of the muscle car. Sales had slowed in recent years, having peaked in the mid- to late-'60s. Ford introduced a new EcoBoost engine option for the Mustang, which was intended to attract a new type of fuel-conscious consumer yet not alienate the loyal V8 fanbase it's had for decades. The new EcoBoost, along with a fresh design, cheap gasoline, and easily available financing, all helped send sales of the 2015 Mustang soaring.

Ford sales analyst Erich Merkle discussed the EcoBoost's impact in "Mustang's hottest market," Southern California, in an October press release: "Almost all of our Mustang growth there can be attributed to EcoBoost."

While the redesigned 2016 Camaro will again challenge the Mustang for the best-selling muscle car next year, the Mustang definitely distanced itself from its major competitor in 2015. 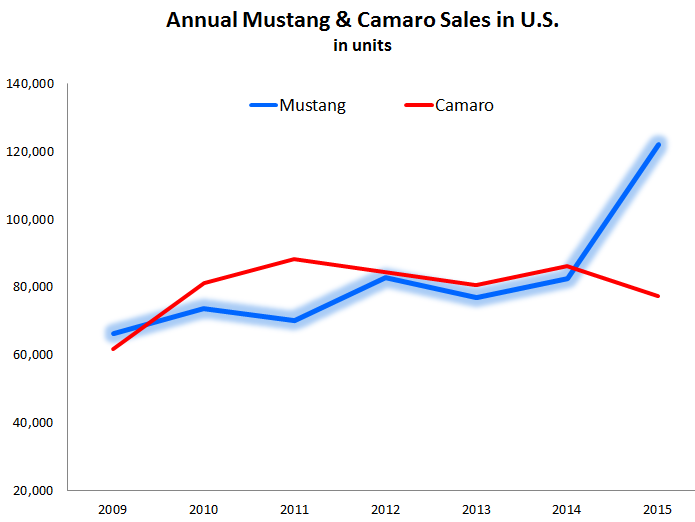 The Mustang had one more huge accomplishment during 2015: It lured in a younger consumer, which the previous design failed to do. In fact, Ford noted that 47% of 2015 Mustang drivers were 16-to-35-year-olds, compared to the 30% share that demographic held for the 2014 Mustang.

All in all, 2015 brought Americans two redesigns of iconic Ford vehicles, and it's not surprising the two remain some of the most popular vehicles in the nation. That's great news for Ford, because few vehicles garner the brand awareness the Mustang does in magazines, movies, races, and car shows, and the F-Series remains Ford's most profitable vehicle by a landslide.