These catalysts were subtle, but they did their parts in pushing Inovio shares down 27% in 2015. 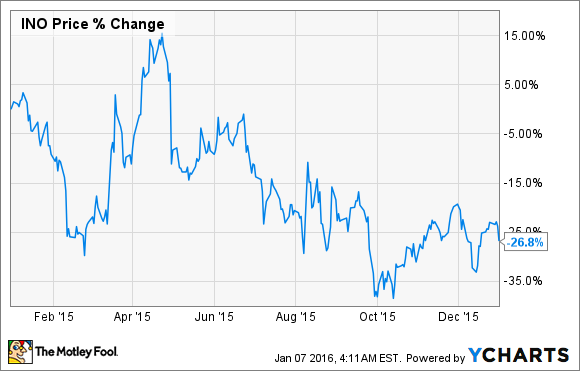 Shares of Inovio Pharmaceuticals (INO -3.95%), a clinical-stage biopharmaceutical company focused on the development of DNA-based immunotherapies to treat cancer and various infectious diseases, tumbled by 27% in 2015 based on data from S&P Capital IQ. If you're looking for the reasons why Inovio struggled so mightily, dilution and the fear of prescription drug reform are the answers you seek.

One of the biggest issues with clinical-stage biotech companies is that they're typically losing money. Without any products, raising cash to keep the lights on falls to either forging collaborative partnerships (and receiving some form of compensation), taking out a loan, or, more commonly, issuing shares of common stock. Doing so often does the trick of raising much needed capital, but it also dilutes the value of the shares held by existing investors.

In late April, Inovio announced that it was pricing 9.5 million shares of common stock at $8 per share in the hopes of raising $76 million before fees and commissions. Ultimately, the underwriters of the deal exercised their right to purchase an additional 1.425 million shares. All told, Inovio raised $82.1 million after expenses. Although this money gives Inovio a lengthy cash runway, the $8 per share offering price was well below the $9.85 the stock closed at during the previous session.

The other big issue for Inovio was the discussion beginning in September of potential prescription drug reforms. You can go right ahead and blame Martin Shkreli and privately held Turing Pharmaceuticals for purchasing a rare disease drug in August and jacking up its price nearly 5,500% in September overnight without changing anything involving its formulation or manufacturing process. Doing so set off a wave of public outrage regarding how drugmakers price their products, and Congress has since been picking a few battles here and there with drugmakers.

Inovio is primarily focused on its cancer immunotherapy vaccines. If proven effective, these vaccines will likely command five- or six-digit annual price tags. These steep costs are precisely what lawmakers are looking to target, meaning Inovio's shareholders were more or less spooked about the potential for prescription drug reform to hit home.

Now for the most important question: Could Inovio's fortunes improve in 2016?

In my opinion, Inovio could be headed for a surprisingly strong year. Inovio will begin a late-stage trial for its lead drug, VGX-3100, a treatment for cervical dysplasia, in 2016, but will more than likely be delivering a conveyor belt of phase 1 data to investors on INO-3106 for aerodigestive cancer, INO-1400 for breast cancer, lung cancer, and pancreatic cancer, and INO-3112 for head and neck cancer and cervical cancer. If these studies show promise, it's always possible more partners could come calling. Ultimately, Inovio remains a very risky bet, but I like its reward potential moving forward.