Expected to launch out of the gate, Cologuard's growth was a major disappointment to Wall Street and investors in 2015. 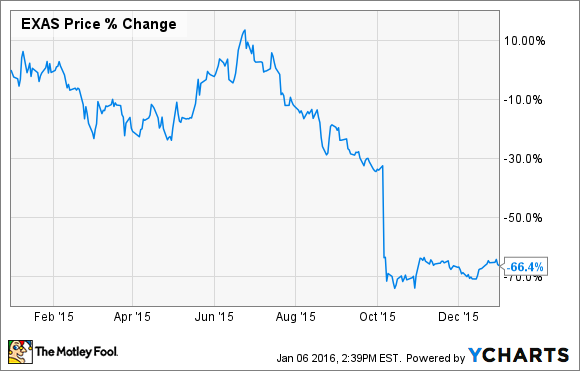 Shares of Exact Sciences (EXAS 0.83%), the creator and manufacturer of the Cologuard diagnostic test, which is designed to detect colorectal cancer and advanced adenomas, plunged by two-thirds (66%) in 2015 based on data from S&P Capital IQ. The culprits behind the significant move lower? Look no further than Cologuard's less-than-stellar launch and the federal government continuing to pare back Medicare reimbursements.

When Cologuard was launched in 2014, and the product not long after received reimbursement approval from Medicare, the assumption was that it would storm out of the gate. With Medicare footing a large portion of the bill, it was believed that seniors would jump at the chance to get a non-invasive colorectal cancer screening. Unfortunately, the data shows that Cologuard's launch has been anything but blazing.

Based on Exact Sciences' third-quarter report, Cologuard generated just $12.6 million in revenue, and the company completed approximately 34,000 tests, a roughly 60% increase from the sequential second quarter. What remains a nuisance is the patient compliance rate of just 73%. The compliance rate is the number of completed tests based on the number of collection kits shipped to patients 60 or more days prior to the end of the quarter. In other words, 27% of patients aren't following through and sending their sample back to Exact Sciences. All told, Exact Sciences has lost $117.8 million in the first nine months of fiscal 2015.

The other issue here is that the federal government is looking for ways to reduce the reliance of private businesses on government-sponsored care. What this means is the expectation of Medicare reimbursement declines in the coming years. For example, a 2% reduction in Medicare fee-for-service claim payments has knocked the reimbursement rate for Cologuard down to $483.35 in 2016. With some of the cost for the test eventually getting pushed back to consumers, we have to wonder whether they'll pay it.

But the big question is whether things will get better for Exact Sciences in 2016. My guess is to expect some modest improvement.

It takes a while to educate physicians and consumers about the diagnostic options available to them, and we're seeing a steady increase in diagnostic use over the last two quarters. Understandably, we're still not at a point where Exact Sciences can begin thinking about profitability, but we should begin to see its net loss and cash outflow move in the correct direction in 2016. There's a lot of potential here for the elderly to take advantage of a non-invasive diagnostic test that's considerably more accurate than its predecessor, but it'll take time and marketing spending on Exact Sciences' part to keep the ball rolling. This is an exciting company with long-tail growth potential that I currently have on my radar.