Please ensure Javascript is enabled for purposes of website accessibility
Log In Help Join The Motley Fool
Free Article Join Over 1 Million Premium Members And Get More In-Depth Stock Guidance and Research
By Ashraf Eassa - Jan 7, 2016 at 10:30AM

The iDevice maker didn't pre-announce poor fiscal first-quarter results, but that's not what investors should really care about.

Apple (AAPL 2.14%) stock has declined substantially since peaking at around $134 per share, largely thanks to multiple reports that the iDevice maker is seeing weaker-than-expected demand for its latest iPhone 6s/6s Plus smartphones. 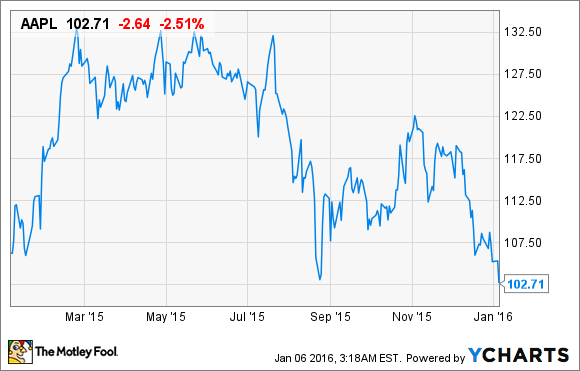 Lately, as I peruse comments from various Apple shareholders discussing this news, I see one pretty significant misconception that I would like to clear up here.

"Apple would have warned if things were going badly"
One common thought among some Apple investors is that if things were truly going as badly for Apple's iPhone 6s and 6s Plus as the various reports claim, then the company should have come out and negatively pre-announced that they were going to miss estimates.

There is a significant problem in this thinking, though: the problems that these negative supply chain data points portend won't actually impact Apple's fiscal first-quarter results; they'll impact the guidance that Apple will issue for its second fiscal quarter.

Since Apple hasn't actually issued guidance for its fiscal second quarter, there's nothing for the company to negatively pre-announce.

The bad news is fairly obvious: If these supply chain rumors are correct (and frankly, given that the rumors/reports from the supply chain seem to all point to weaker-than-hoped iPhone builds, I believe them), Apple is going to guide to a fairly underwhelming fiscal second quarter.

Indeed, if iPhone sales drop year-over-year, it's going to be very tough for Apple's other product categories to pick up the slack.

Furthermore, if iPhone sales drop year-over-year during the second fiscal quarter, there's not a whole lot that Apple can do -- aside from the introduction of the rumored iPhone 6c -- to really stimulate sales during the third fiscal quarter.

In a nutshell, it's looking like a rough year for Apple's once-untouchable iPhone segment.

The potential silver lining here, though, is that the investment community by and large seems to be expecting iPhone to go south during the fiscal second quarter and, quite likely, for the rest of the fiscal year. This means that pessimism around iPhone is probably mostly built into the stock price.

Now, that's not to say that iPhone sales can't deteriorate further and come in even worse than even the most pessimistic expectations out there -- anything can happen. However, as far as Apple stock is concerned, I think there's a reasonable chance that we're close to, if not at, the bottom.

An opportunity for iPhone 7 optimists
At this point, I believe that the initial performance of the iPhone 7 (i.e. first weekend sales) will most likely be the next major catalyst for the stock price, with the stock largely remaining range bound until then.

If the initial first weekend numbers are strong, then this could point to a much more robust iPhone 7 cycle, which could lead to appreciation in Apple stock in anticipation of continued strength across the fiscal year (though Apple would still face the looming challenge of the iPhone 7s cycle).

If the initial iPhone 7 numbers fail to impress, then this could be a signal to investors that even with a dramatically improved/different product, Apple just can't juice iPhone sales. Although some might argue that Apple has other product categories and that it's not all about iPhone, iPhone has been (and will likely continue to be) Apple's main revenue and profit center for years to come.

If iPhone isn't growing (or worse, is in decline), then Apple will have a very hard time delivering revenue and profit growth in the years ahead, which could ultimately lead to a further contraction in Apple's price-to-earnings ratio and ultimately stock price as investor confidence wavers.