The pharma appears to have been a favorite name among investors shedding stocks for tax purposes last month. Can it rebound in 2016? 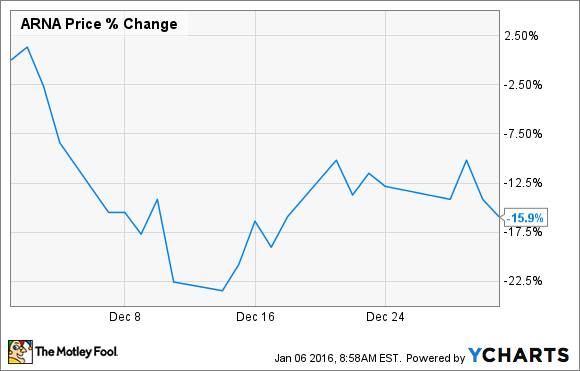 What: According to data provided by S&P Capital IQ, the anti-obesity drugmaker Arena Pharmaceuticals (ARNA) lost nearly 16% of its value in December. Given the lack of any obvious negative catalysts during the month, this downward move was probably the result of investors shedding the laggards in their portfolios at the end of the year for tax purposes.

So what: Arena's shares dropped by 47% last year because of the sluggish sales for its fat-fighting pill Belviq that's marketed by the Japanese drugmaker Eisai. For the entirety of 2015, for instance, Arena is only expected to book around $38 million in total revenue. While the Street does expect Arena's revenue to jump to $47.8 million in 2016, the company will likely still be cash flow negative this year, and probably for several years to come.

Now what: Arena and its competitor Orexigen Therapeutics (NASDAQ: OREX) have found out first hand just how tough it is to successfully market an FDA-approved weight loss medicine. Because of the lack of long-term safety on these drugs, private and public payers have been slow to offer coverage, meaning that the only option many potential patients have to try these new drugs is to pay out-of-pocket. That's rarely turned out to be a winning strategy for a prescription medicine.

So, despite Arena and Eisai submitting a New Drug Application to the FDA for an extended-release formulation of Belviq last November, it's hard to imagine the drug's sales picking up in a meaningful way until more payers are on board. And that event doesn't appear likely until either Arena or Orexigen complete their ongoing cardiovascular outcomes trials. As such, investors will probably want to play it safe by remaining on the sidelines with these weight-loss drugmakers this year.