Please ensure Javascript is enabled for purposes of website accessibility
Log In Help Join The Motley Fool
Free Article Join Over 1 Million Premium Members And Get More In-Depth Stock Guidance and Research
By Andrés Cardenal - Jan 7, 2016 at 8:20AM

Las Vegas Sands is paying a big and sustainable dividend.

Las Vegas Sands (LVS -2.17%) stock is down by a staggering 25% from its highs of the last year. The company is facing falling demand in Macau, but the business remains financially healthy. Even better, at current prices, Las Vegas Sands is paying a huge dividend yield of 5.9%.

All that being said, the yield is high. Which of course begs the question: Is Las Vegas Sands stock a buying opportunity for dividend investors, or should you stay away from the company until things turn for the better in Macau?

Playing a tough hand
The Chinese economy has been quite unstable lately. Government authorities have imposed a series of restrictions on Macau gamblers to combat corruption and illegal money laundering via casinos in the region, and this is materially hurting revenue for casino operators in Macau. Gross gaming revenue for Macau casinos declined 34.3% during 2015, and official statistics for December show a 21.2% fall in gaming revenue.

Las Vegas Sands makes more than 50% of its operating profits from Macau, so industry headwinds are having a material impact on the company's business, and total revenues declined 18% during the third quarter of 2015. On the other hand, it's important to note that Las Vegas Sands is still making considerable money under challenging conditions; the company remains quite profitable with an adjusted EBITDA margin above 36% of revenue.

Other big casino companies such as Wynn Resorts (WYNN -3.57%) and MGM (MGM -3.21%) are also facing difficulties in Macau. Wynn Resorts suffered a big decline of 39% in revenues from Macau during the third quarter, and this dragged overall sales down by nearly 27%.

MGM has significantly less exposure to Macau than Las Vegas Sands or Wynn Resorts, but the company still reported a big decline of 33% in revenues from the region in the third quarter. Overall MGM sales are holding up much better, though; MGM's total revenues contracted 8% during the quarter.

The house always wins
Las Vegas Sands is the undisputed leader in Macau. The company owns 52% of hotel rooms available among gaming operators, and this market leadership is an important advantage when it comes to sailing through turbulent waters. Unlike Wynn Resorts, which is more focused on VIP gamblers, Las Vegas Sands has a bigger presence in the mass market, and this segment is doing relatively better. Besides, management is diversifying its business strategy and increasing its focus on areas such as  MICE -- meetings, incentives, conventions, and exhibitions -- to drive additional revenue sources.

It's hard to tell how things will evolve in Macau over the coming months, but CEO Sheldon Adelson sounds quite confident about Las Vegas Sands and its prospects. In his own words:

We develop critical mass to scale and diversification. And we offer product and amenities that are best positioned to capture long-term tourism and consumption growth in Asia. We're unique in the scale and diversity of our portfolio. We have focused on the most stable and profitable segment, the mass market. We're clearly differentiated by the strength of our cash flow and balance sheet and we're the further distinguished versus the competition by our track record as well as the pioneer of the MICE-based integrated resort business model.

Buying opportunity?
Las Vegas Sands has an impressive track record of dividend growth -- what was a quarterly dividend of only $1 per year in 2012 has now turned into $2.88 for 2016. This represents a compounded annual growth rate of 30.3% in dividend payments. 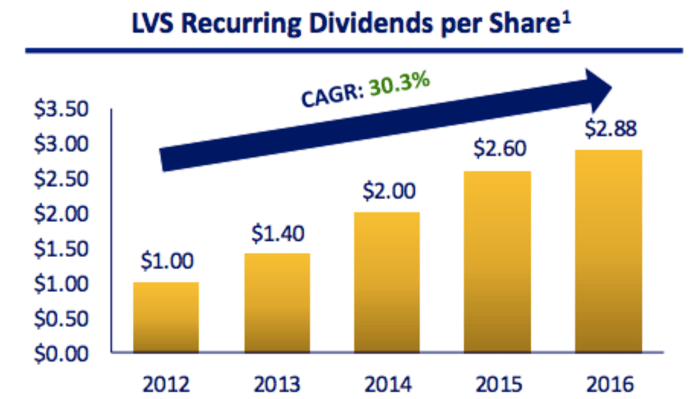 Even in a tough year, Las Vegas Sands produced nearly $3.7 billion in operating cash flow over the trailing-12-month period ended in September, and capital expenditures absorbed only $1.5 billion of that money. This leaves the company with roughly $2.2 billion in annual free cash flow. Dividend payments amounted to nearly $2.6 billion over that period, but free cash flow will most likely increase in a big way over the coming years.

Las Vegas Sands will finish the construction of Parisian Macao and the St. Regis Tower at Sands Cotai Central in 2016, and this will significantly reduce capital expenditures, liberating a lot of cash for dividend payments. Projected capital expenditures are expected to decline from $1.9 billion in 2015 to $1.6 billion in 2016 -- and to a significantly lower $800 million in 2017. Even if there is no improvement whatsoever in operating cash flow by 2017, projected free cash flow should be more than enough to comfortably pay for dividends with internally generated funds.

Andrés Cardenal has no position in any stocks mentioned. The Motley Fool has no position in any of the stocks mentioned. Try any of our Foolish newsletter services free for 30 days. We Fools may not all hold the same opinions, but we all believe that considering a diverse range of insights makes us better investors. The Motley Fool has a disclosure policy.