What: Shares of Shell Midstream Partners, L.P. (NYSE:SHLX) climbed 13% in December despite the Alerian MLP index falling more than 7%. While there are some likely fundamental reasons why Shell Midstream was able to gain while others fell, one potential catalyst was that its vice president of operations upped his stake in the company. 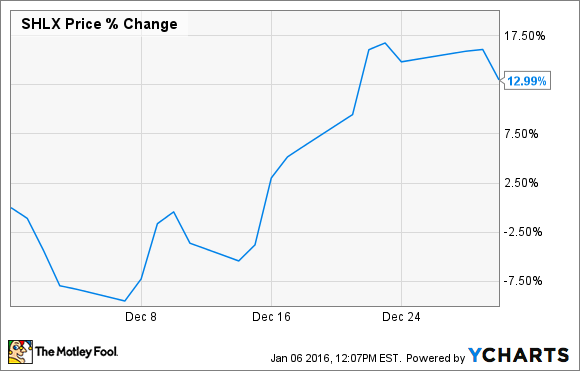 So what: Like so many other energy companies, the month of December started off a little shaky for Shell Midstream Partners as the entire industry was hit by OPEC's decision to basically remove all production quotas, as well as industry giant Kinder Morgan's decision to cut its dividend to shore up the balance sheet. These moves had a lot of investors questioning their position in midstream companies and especially master limited partnerships with some unstable balance sheets.

This is much less of a problem for Shell Midstream Partners. Not only is the company more than paying for its distribution to shareholders with internally generated cash flow, but there is also plenty left over to help fund growth. Also, its current debt-to-EBITDA ratio of 2.3 times is quite low compared to industry averages and well below the level ratings agencies like to see when assessing credit ratings.

What also likely helped Shell Midstream Partners case was that Alton G. Smith, its VP of operations, more than doubled his personal ownership in the company. It's always good to see management teams eating their own cooking, and with shares trading at some of their lowest levels in December, it appears that some investors took Smith's lead in picking up cheaper shares.

Now what: Thanks to Shell Midstream's stronger balance sheet and strong coverage of its payout to shareholders -- not to mention that its corporate sponsor is Royal Dutch Shell, which has some perks as well --  the company bucked the industry swoon in December. Shell Midstream has plans to grow its payout at a rapid pace over the next few years as the parent company drops down some of its massive midstream portfolio. That sounds very tempting as an investor to get that kind of growth, but we do need to make sure that Shell Midstream Partners doesn't stretch itself too thin financially to meet those goals.