It was expected to be Orexigen's greatest selling point, but this miscue turned into a nightmare for the company's weight-control management drug Contrave.

Shares of Orexigen Therapeutics (NASDAQ: OREX), a biotechnology company focused on the development of therapies to induce weight loss, collapsed 72% in 2015, based on data from S&P Capital IQ. Shareholders can squarely point to one catalyst for the fall: its long-term cardiovascular-outcomes study for Contrave.

When Contrave first was approved by the Food and Drug Administration in September 2014, there was a lot of hope on Wall Street and from investors that it would be a success, unlike Qsymia and Belviq, two other weight-control management drugs that had been approved before it. There was the expectation that licensing partner Takeda Pharmaceuticals (NASDAQOTH: TKPYY) was going to bring its marketing expertise to the table.

Most importantly, the duo of Orexigen and Takeda had been running a long-term cardiovascular outcomes study of nearly 9,000 patients designed to determine the safety of Contrave over the long run. The potential for superior efficacy, or even similar efficacy as the placebo, would have deemed Contrave safe to use over the long run, and it would potentially have boosted near-term sales of the drug. 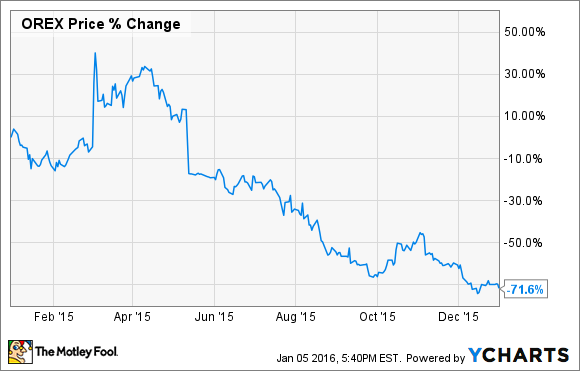 However, in May 2015 Orexigen's world came crashing down due to a ruling from the FDA. In March, Orexigen reported that Contrave led to a 41% reduction in the risk of death in patients taking the drug in its long-term CV outcomes trial. However, this data encompassed only a quarter of the defined analysis of the study. The second quarter of patients analyzed demonstrated no statistically significant advantage for Contrave.

Ultimately, the FDA wound up chastising Orexigen for releasing immature data from a study where the analysis was incomplete. Because Orexigen released the data before the trial was complete, the FDA was concerned that the data from the remaining patients could be biased. Long story short, the entire long-term CV trial was thrown out, and the FDA required Orexigen and Takeda to run an additional long-term study. This new study isn't expected to be completed until 2022.

With Contrave losing its primary advantage over its competitors, sales of the weight-loss drug have languished, much like its peers. Contrave sales in the third quarter hit $12.8 million, and prescriptions written rose by 10% from the sequential second quarter. However, it appears that Takeda and Orexigen are having to steeply discount the product to move it off pharmacy shelves.

With losses expected for years to come, and Contrave's growth prospects now cloudy, it could be a while before the sun shines on Orexigen once again.