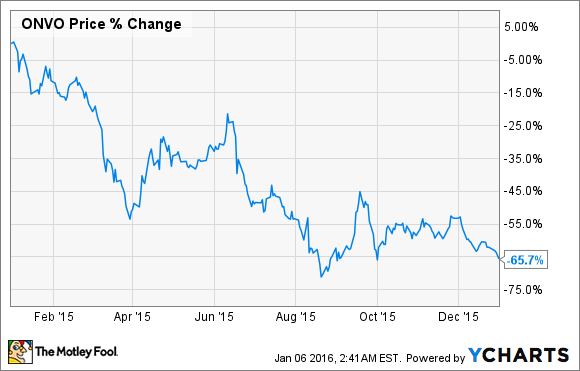 Shares of Organovo Holdings (ONVO 5.86%), a life sciences company focused on developing bioengineered human tissues for drug discovery, development, and biological research, tumbled 66% in 2015 based on data from S&P Capital IQ following a trio of bad news events that sacked any chance of a rally.

First, Organovo is primarily in the research and development stage of its existence, and as such it tends to lose money. The only way Organovo can ensure the lights stay on is by selling shares of its common stock. Doing so does do the trick in terms of raising cash, but it also dilutes the value of existing shareholders' shares. On June 17, 2015, Organovo announced a public offering which ultimately netted the company $46 million. However, the share price of the offering was a full 18% below where the stock closed the previous day. Although Organovo has what appears to be a strong enough cash runway to last well into 2017, it also filed paperwork with the Securities and Exchange Commission in 2015 that could allow for more dilutive share offerings moving forward.

Secondly, the company's only commercial product, the ExVive3D Human Liver Tissue, hasn't sold well in the early going. That's understandable -- Organovo is still in the stages of acclimating its potential core customers with the device, so it's not exactly gone gung-ho into sales mode yet. It also hopes to soon add a kidney tissue test to its product portfolio. These assays help analyze the toxicity of experimental drugs on bioengineered human liver (or kidney) tissue before they are tested in actual human beings. But a fiscal 2016 outlook of just $1.2 million to $1.4 million in sales is a lot lower than Wall Street had envisioned when ExVive3D first came to market.

Lastly, during Organovo's fiscal 2016 Q1 conference call, CEO Keith Murphy announced that while the company had secured nearly $2 million in contract bookings for ExVive3D, it would only be providing contract booking updates on an annual basis as opposed to a quarterly basis. The reasoning? Murphy noted at the time that customers could back out of bookings, so quarter-to-quarter analysis wouldn't prove helpful. Unfortunately, investors and Wall Street didn't take too kindly to the news.

The big question now is whether or not life will get better for Organovo and its shareholders in 2016.

Organovo does have the means to ensure it's well-capitalized for the near future, and it has very intriguing technology. Its assay tests could transform the drug development process if its marketing efforts to reach its core customers prove successful, and its implantable bioprinted organ research could potentially pay dividends many years down the road.

However, Organovo is also likely to continue hemorrhaging cash and keeping investors in the dark about ExVive3D orders until its once-yearly update. Without a couple major partnerships, I struggle to see what sustainable catalyst will push Organovo substantially higher in 2016. As of now, this continues to look like a high-risk, high-reward stock, if it can survive over the long run.