None of the recent macro concerns will directly affect the rising middle-class Chinese consumer, which is good news for the iDevice maker.

The market certainly woke up on the wrong side of the bed for 2016, and most fingers are pointed to troubling macro-economic data out of China along with The Middle Kingdom's brutal market sell-off. The Shanghai Composite Index is already down 10% year to date, and it's only been a week. You probably also saw those headlines about the day that the Chinese market was only open for less than 30 minutes before circuit breakers (which have since been suspended) were triggered, ending the day down 7%.

Meanwhile, pessimism surrounding Apple (AAPL 0.03%) continues to build as well, in part because China is such an important market for the Mac maker. But there are two important reasons why all of the China-related storylines won't affect Apple as much as you might think.

But it's also true that overall stock market participation is fairly low in China, so the gyrations aren't directly affecting the average consumer. For example, the Southwestern University of Finance and Economics in Chengdu conducts a regular China Household Finance Survey led by professor Gan Li. According to the survey, just 6% of households in China owned stock during the first quarter of 2015.

So while the volatility of the Chinese stock market makes for some panicky headlines, the average Chinese consumer's discretionary spending and income is just fine. They can still go out and buy that iPhone.

China's slowing GDP growth is not affecting the mainstream consumer
The other recurring theme is China's slowing macroeconomy, as evidenced by decelerating GDP growth rates. But again, these GDP figures aren't directly translating into reduced income or spending on the consumer level. Quite the contrary, in fact.

Much of China's GDP growth over the past decade has been driven by investing and exports, but China's economy is now transitioning toward consumer consumption, which will only benefit consumer-oriented companies like Apple. Consider per-household annual consumption by category from 2005, along with forecasts through 2030, where discretionary categories are growing the fastest: 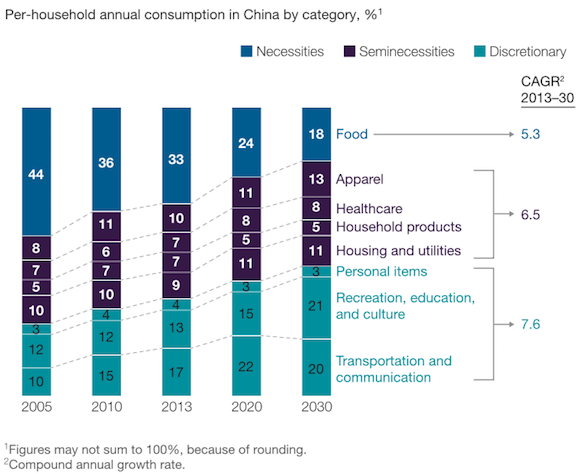 Or consider the fact that Apple's China business has grown incredibly against a backdrop of slowing GDP: 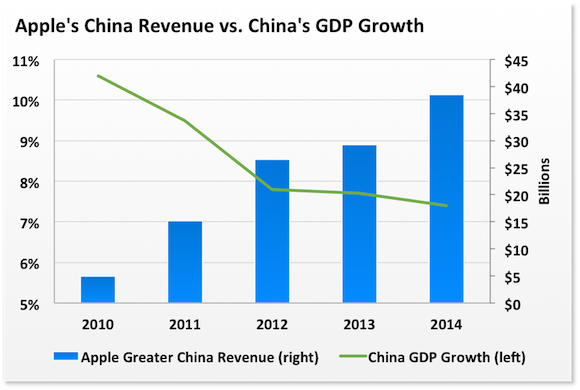 The rising middle class in China won't be stopped, and that's good news for Apple.