What: Shares of Seadrill Ltd. (NYSE:SDRL) and Seadrill Partners LLC (OTC:SDLP) dropped 44.2% and 57.5%, respectively, in December as pressure from oil prices continued to weigh on their future.

So what: Instead of recovering in 2015, as many analysts predicted, oil prices continued to fall, ending the year around $35 per barrel. The problem for both companies is that a once-impressive backlog is being whittled away because new offshore contracts are nearly impossible to come by. That means less revenue and earnings in the future, which is a problem when you have added billions of dollars in debt to build ultra-deepwater offshore rigs that no one wants anymore. 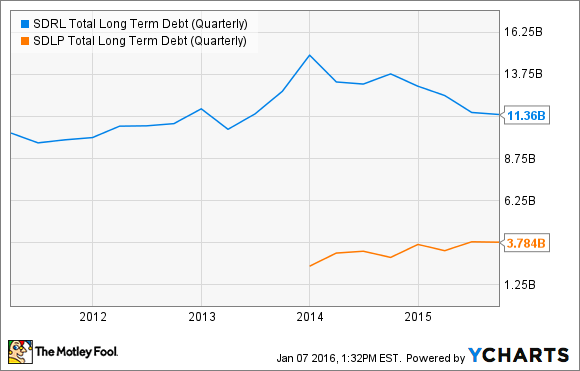 Now what: Seadrill has one of the youngest and best deepwater drilling fleets in the world, but it's also in a market that doesn't have any interest in making long-term bets on expensive offshore oil fields. If explorers are even spending at all, they'd rather spend money on short, shallow-water drilling contracts or even shale oil. That puts Seadrill in a tough position and the debt hanging over the company becomes a bigger and bigger cloud the longer oil prices stay low. If oil prices recover to anywhere near $100 per barrel, these stocks will be big winners, but that's looking less and less likely every day.