Please ensure Javascript is enabled for purposes of website accessibility
Free Article Join Over 1 Million Premium Members And Get More In-Depth Stock Guidance and Research
By Daniel B. Kline - Jan 9, 2016 at 11:11AM

The company has done the same thing year after year, but there are some extenuating circumstances this year.

The company had to drop its bid to acquire Time Warner Cable (NYSE: TWC) for $45 billion in April after the Federal Communications Commission made it clear it would not approve the merger. To make matters worse Comcast had to watch TWC agree to be acquired by Charter Communications ( CHTR -1.31% ) in a deal that should win approval, if only because Charter does not have quite as awful a reputation with the general public as Comcast does.

In addition to losing a merger, which might have helped the company continue to dictate terms as a near-monopoly in many markets, it also spent 2015 dealing with the same woes as the rest of the pay television industry. On the negative side, while it did not reach the numbers some predicted, cord cutting has become a real issue. On the positive, cutting the cord requires quality broadband service.

That puts Comcast in an odd position as we start 2016. The company is still not liked by a lot of the public and that may cause increasing numbers of subscribers to consider dropping cable. But, it will also force those same customers into making sure they have good broadband and for some Comcast will be there only choice.

As Comcast decides what to do with its dividend for the new year, it must factor in the likely decline of its cable business and its potential growth as an Internet service provider. 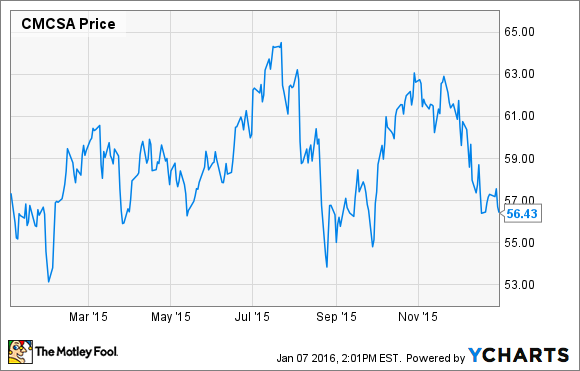 A look at the business
Comcast gained 24,000 cable subscribers in Q1, lost 69,000 in Q2, and dropped another 48,000 in Q3, according to numbers from Leichtman Research Group (LRG). That's a relatively minor loss of 93,000 pay-TV customers for the first three quarters of 2015 for a company that closed Q3 with over 22.25 million cable subscribers.

Put together those two numbers give Comcast a fairly rosy picture. It may lose cable customers, but it's likely to add many more broadband users than it loses if these trends hold up. Given this, even with the lingering disappointment over the quashed Time Warner Cable deal, there is no reason to believe the company won't do what it always does when it comes to its dividend -- raise it slightly.

Comcast's dividend history
Since first offering a dividend in 2008, Comcast has raised the annual payout slightly each year. Last year the company paid $0.25 per share each quarter, up from $0.225 for the four quarters in 2014. That follows similar increases in each of the years preceding this one since the company instituted the dividend.

So, even in a somewhat unsteady business environment where it may have a new, large competitor in Charter should the Time Warner Cable deal go through, Comcast will almost certainly increase its dividend in 2016.