BNSF represented a big change to Buffett's Berkshire Hathaway (NYSE:BRK.A)(NYSE:BRK.B) when the Omaha conglomerate purchased the company in 2010. Railroads are capital-intensive and tend to carry large financial burdens like employee pensions, generally making them polar opposites to Buffett's earliest investments.

But when you're cursed with the blessing of billions of dollars in surplus cash, as Buffet is, base hits are more plentiful than home runs. And though BNSF is unlikely to be a one-decade 100-bagger for Berkshire, it's an investment that is clearly paying off for Berkshire shareholders.

What drives BNSF?
If you study BNSF's results over the last 15 years, you'll find the stodgy business hasn't changed all that much. It's simply continued to move stuff across its rails. As the chart below shows, it's actually doing less today than it did in 2006, when freight volume reached a pre-crisis peak. 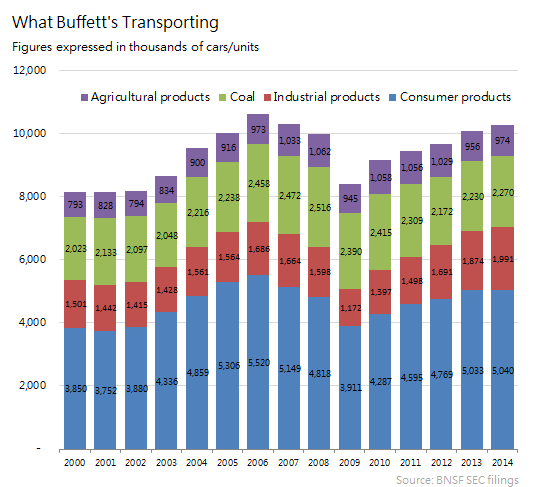 Of course, volume isn't everything. Even though BNSF is moving less stuff, it's making way more money. BNSF has slowly benefited from rising revenue on a per-car basis, which grew at an impressive compounded rate of 4.9% per year from 2000 to 2014. 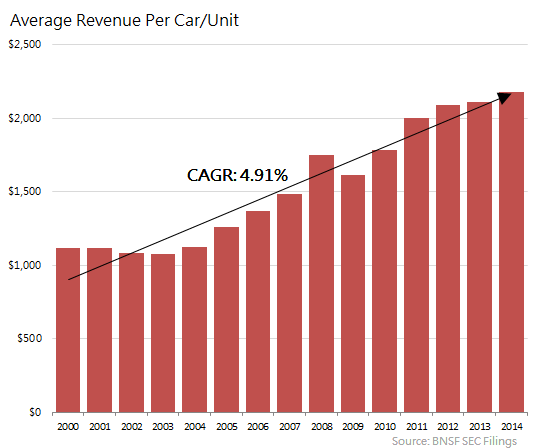 Some freight is worth more than other types. Agricultural products are worth the most, at an average of nearly $4,300 per car in 2014.

But BNSF's rising revenue per car can't be explained entirely by the fact it's moving more grain and fewer consumer goods. The shipments that generate the least revenue, and which have seen the slowest increases in pricing -- consumer products -- have consistently made up 47% to 53% of its freight by cars from 2000 to 2014. 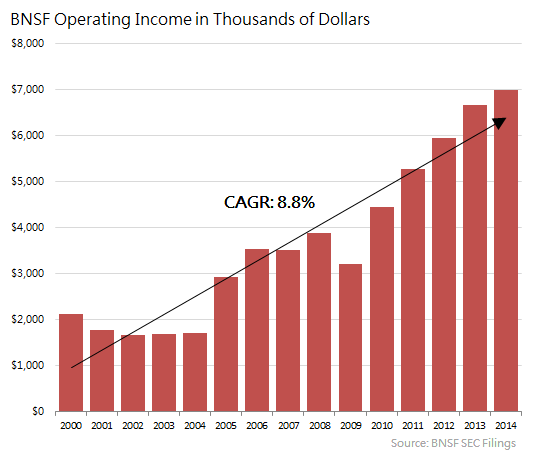 Boiling it down, BNSF has benefited from across-the-board price increases. Higher rates for each car offset stagnant volume, driving BNSF's earnings higher. In 2014, BNSF achieved an EBIT margin of nearly 31%, which is 7.6 percentage points higher than in the year 2000.

Margin expansion is the direct result of revenue growing faster than expenses. Only fuel expense -- part of which is defrayed by fuel surcharges -- have grown at a pace exceeding revenue. Compensation and benefits, its biggest line-item expense, grew at 4.4% vs. compounded revenue growth of 6.7%.

This is the beautiful thing about pricing power and operating leverage. Over time, revenue that compounds faster than expenses results in exponential growth in profitability. So while BNSF is moving less freight than it did nearly a decade ago, it's making a whole lot more doing it.