Please ensure Javascript is enabled for purposes of website accessibility
Log In Help Join The Motley Fool
Free Article Join Over 1 Million Premium Members And Get More In-Depth Stock Guidance and Research
By Timothy Green - Jan 10, 2016 at 10:17AM

The consumer electronics retailer had a solid year, all things considered, but slowing domestic sales growth and the potential for a weak holiday season weighed on the stock.

What: Shares of consumer electronics retailer Best Buy (BBY -2.80%) declined by 21.9% during 2015, according to S&P Capital IQ data. While Best Buy had a solid year overall, considering it is still in the midst of a turnaround effort, weak guidance from the company on multiple occasions sent the stock tumbling. 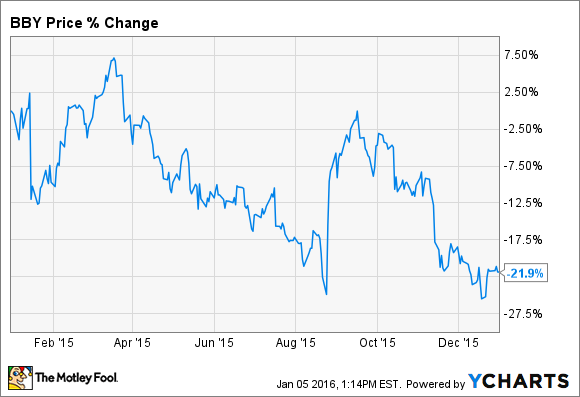 So what: The first steep drop for Best Buy stock in 2015 came in the middle of January, when the company reported on its holiday sales trends. Domestic comparable-store sales were up 2.6% during the 2014 holiday season, but the company issued cautious guidance for the first half of the year, calling for flat to negative low-single-digit domestic comparable-store sales growth.

The stock recovered, but in March shares of Best Buy began to tumble again, driven in part by a profit warning due to the company's consolidation of its operations in Canada. The stock jumped in August when Best Buy reported better-than-expected results, erasing most of the year-to-date losses, but mixed earnings in November, along with disappointing holiday guidance, sent the stock lower once again.

Now what: The first nine months of fiscal 2015 were generally positive for Best Buy, despite the fluctuations in the stock price. Revenue was down, but that's mostly due to store closings in the international segment. Gross margin improved by 110 basis points to 24.1%, while non-GAAP operating margin jumped to 3.05%, up from 2.5% during the same nine-month period in 2014.

Despite this progress, slowing comparable-store sales growth weighed on the stock during 2015, and Best Buy expects domestic sales to be flat in the fourth quarter. The company will provide details on its holiday sales results on Thursday, Jan. 14, and the stock could fall further if Best Buy disappoints.

Timothy Green owns shares of Best Buy. The Motley Fool has no position in any of the stocks mentioned. Try any of our Foolish newsletter services free for 30 days. We Fools may not all hold the same opinions, but we all believe that considering a diverse range of insights makes us better investors. The Motley Fool has a disclosure policy.