Please ensure Javascript is enabled for purposes of website accessibility
Log In Help Join The Motley Fool
Free Article Join Over 1 Million Premium Members And Get More In-Depth Stock Guidance and Research
By Jeremy Bowman - Jan 10, 2016 at 7:45AM

What: Shares of Sonic Corp. (SONC) rode the tailwinds in the fast-food market to a 19% gain last year, according to data from S&P Capital IQ. As the chart below shows, it was a rocky year for the burger slinger, but by the time the calendar flipped the fast-food chain was solidly in the green. 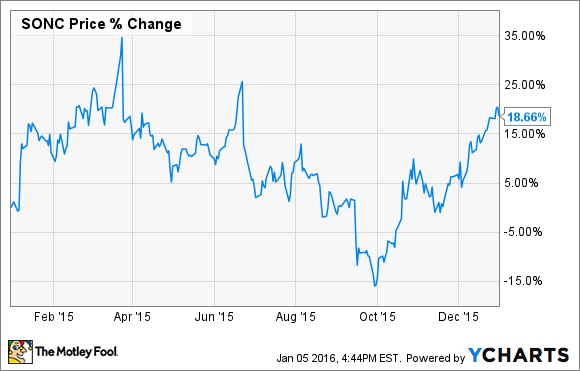 So what: Sonic got off to a hot start last year, jumping 10% on January 7 after a blowout first quarter earnings report. Net income in the period jumped 23% to $10.1 million, and its per-share profit of $0.18 topped the consensus at $0.16. Shares continued to climb following the report, breaking $32, and spiked another 6% on the first trading day in March after reporting same-store sales jumped 11.5% in the second quarter. CEO Cliff Hudson credited product innovation and a national media strategy for the strong growth in traffic.

The stock hit its 2015 peak later that month, reaching a closing high of $36.66 in anticipation of the company's second quarter earnings report. Earnings per share beat estimates by a penny and revenue also topped expectations, but shares fell 10% due to a conservative outlook.

The stock hovered around $30 for the next several months before tumbling 9% in a single session in September. The company's comparable growth slowed to just 4.9%, frustrating investors who had come to expect a faster pace of growth. Shares began rallying after the final earnings report came out, however, as the market was pleased by the company's projection of $1.28 to $1.32 in earnings for fiscal 2016.

Now what: Though much attention has fallen on the upstart fast casual brands, traditional fast-food chains were much stronger performers, and Sonic seems to be a beneficiary of that trend. We're only in the first days of 2016, but Sonic has already popped, delivering a strong first quarter earnings report. Earnings per share improved from $0.18 to $0.24 and same-store sales ticked up 5.3%.

Management touted the company's momentum for continuing to drive profits higher, and with a healthy expansion plan and a reasonable valuation, the stock should continue to push higher in 2016.