Please ensure Javascript is enabled for purposes of website accessibility
Log In Help Join The Motley Fool
Free Article Join Over 1 Million Premium Members And Get More In-Depth Stock Guidance and Research
By Steve Heller - Jan 10, 2016 at 9:00AM

When the financial crisis hit, it wreaked havoc on General Electric's (GE 1.30%) dividend and caused the industrial giant to lose its coveted dividend aristocrat status, a status it earned after increasing its annual dividend payment for 25 consecutive years. 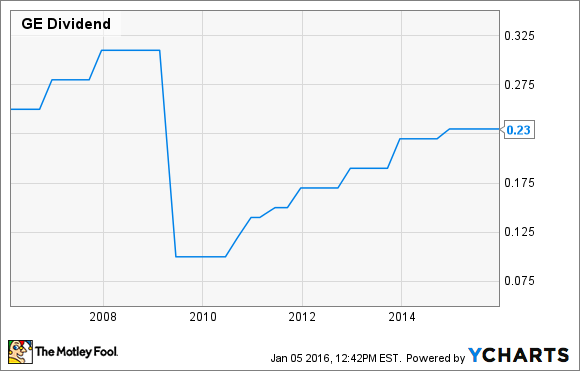 Although GE's dividend payment has recovered some since the crisis, it remains well below pre-crisis levels. Considering GE has raised its dividend payment each year since 2010, it's reasonable to think management would raise the dividend again in 2016 but is not guaranteed. Which of course begs the question, will GE actually raise its dividend in 2016?

Pardon our appearance during restructuring
GE is currently in the process of exiting the financial services business by divesting the majority of its GE Capital assets. Since the $275 billion divestment was revealed last April, it's announced $157 billion in asset sales and completed a $65 billion spinoff of Synchrony Financial.

The massive divestment also resulted in significant one-time charges against its 2015 earnings -- to the tune of $21 billion – through the first nine months. These charges have skewed its dividend payout ratio, which measures what percentage of a company's net income is paid out as a dividend. Historically, this figure has held steady around 50%. 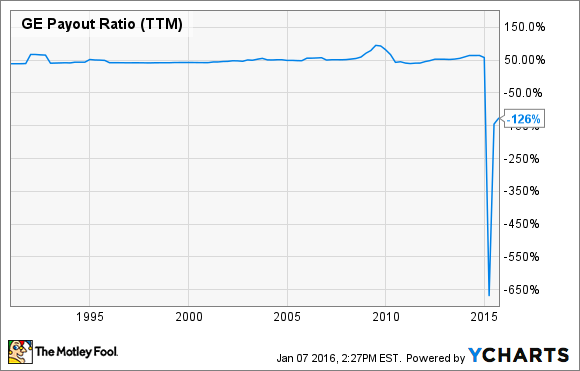 GE's free cash flow picture is also about to change dramatically with the GE Capital exit. As a general indication, GE's remaining industrial operations are expected to account for 90% of the company's operating earnings in full-year 2018.

Between the one-time charges and the divestment's impact to free cash flow, investors are left with focusing on GE's industrial business for this exercise.

Crunching the numbers
Through the first nine months of 2015, GE's industrial cash flow increased by 23% to $6.1 billion, which excludes a $450 million dividend paid by GE Capital to the segment. During this period, GE spent $2.7 billion on capital expenditures, $7 billion on dividends, and $153 million paying down debt. In total, GE overspent its industrial cash flow by about $3.75 billion. To make up for the shortfall, this reporting segment issued $716 million in short term debt and $3.5 billion in long-term debt in the same nine-month period.

Between its industrial cash flow and issuing debt, GE's had roughly $10.3 billion to fund its business, pay dividends, and service debt in the first nine months of 2015. After these expenses, GE is left with about $463 million in excess operating cash -- not much breathing room to justify a dividend increase.

What management said
As noted in its plan to divest GE Capital, management remarked that "it plans to maintain its dividend at the current level in 2016 and grow it thereafter." CEO Jeff Immelt also told investors during the company's annual outlook meeting in December that it plans to sustain an attractive dividend yield – currently around 3% -- relative to peers.

It seems perfectly reasonable that GE wants to ensure it successfully executes on its exit plan from the financial services business before it raises the dividend. The decision may have also been influenced by how GE Capital is considered a systemically important financial institution – SIFI – which the banking arm earned after regulators essentially considered it "too big to fail" following the financial crisis.

Overall, SIFIs face larger capital requirements, regulatory scrutiny, and have less flexibility than non-SIFIs. After selling off $157 billion in assets and completing a $65 billion spinoff in 2015, GE plans to apply for SIFI de-designation of GE Capital in the first quarter of 2016.

Dividends increases aside, GE still plans on returning a tremendous amount of capital in 2016 – roughly $26 billion, split between $18 billion in buybacks and $8 billion in dividends.  In total, the GE Capital exit is expected to return more than $90 billion to shareholders in the form of dividends, buybacks, and a spinoff, by the end of 2018.

With these kinds of numbers, it seems silly to be mad that GE probably won't raise its dividend until 2017.