Why faster growth, free cash flow, and a Model 3 unveil are around the corner.

Last year was critical for electric-car maker Tesla Motors (TSLA 3.89%). Milestones included the introduction of its value-loaded 70 kilowatt-hour Model S, the rollout of its autopilot driving features, the introduction of Tesla Energy products, and the long-awaited launch of its Model X SUV.

What could 2016 have in store for the company? Here are three bold predictions. But first, here's a review of last year's bets:

Model S demand and production faired better than I anticipated, with 2015 Model S deliveries rising 59% compared to 2014 -- an acceleration compared to the company's 41% year-over-year growth in Model S sales in 2014.

The Model X SUV was delayed yet again -- moving from a plan for a late summer launch to a fall launch on September 29.

Despite Tesla's formidable efforts to ramp-up Model S production, demand was robust enough for the company to continue refraining from spending any money on advertising, indicating global demand seems to still be ahead of supply. Further, demand for Model S continued to rise as the year closed. Notably, however, Tesla did introduce a referral program.

1. Vehicle sales growth will accelerate.
Interestingly, the more vehicles Tesla sells, the faster it is growing. For instance, the company's year-over-year growth in vehicle sales in 2014 and 2015 was 41% and 60%, respectively. While this trend of accelerating growth is unsustainable over the long haul, it's looking like the electric-car maker could manage to achieve another year of sales growth acceleration in 2016.

During 2016, I believe Tesla has a good shot at boosting annual deliveries by a rate of 64% or higher. 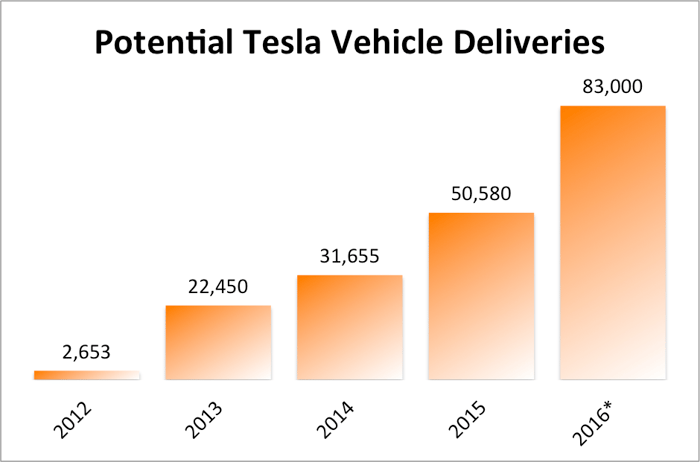 What could drive this growth?

Model X. The company has been very clear that the ramp-up of Model X production will be exponential. And it's already panning out this way. During the final quarter of 2015, Tesla delivered just 208 units of its September-launched Model X. But by the time the company had reported its quarterly sales on January 3, Tesla had completely produced 507 units. The remaining amount beyond the 208 delivered in Q4 were scheduled to be delivered in Q1.

But with around 30,000 deposit-backed orders for Model X on the company's books, and considering Tesla's significant investments in Model X production, the company should be able to become free cash flow positive during the year as it benefits from greater economies of scale in production.

3. The Model 3 will be unveiled in March.
Tesla has said it plans to unveil its lower-cost Model 3 in March this year and begin selling the vehicle in late 2017. But can it live up to its timeline for the vehicle?

With the Model X delayed several years before the company actually began delivering the vehicle to customers, it's difficult to take Tesla's initial schedule for the Model 3 seriously. But the Model 3's importance to Tesla's long-term plans should compel the company to do whatever it takes to stick to its plan for the vehicle.

The Model 3 is particularly important because Tesla will be launching its Gigafactory, or the world's largest battery factory, alongside the Model 3. If either the Model 3 or the Gigafactory is ready for a production ramp before the other, Tesla will be in a tight spot, as both represent significant investments for the company.

Unlike other automakers, Tesla's production vehicles live up to the concept versions of those vehicles. So, what Tesla shows in March will be the minimum standard for the production version of Model 3.

As it turns out, sales growth, free cash flow, and Model 3 are arguably three of the most important items to watch during the year. So, not only will I check back in on these predictions at the end of the year, but I'll also be covering each of these narratives closely as the year goes on. So, stay tuned at The Motley Fool.