Wednesday night's $1.3 billion Powerball drawing will be the largest ever. As interest in lotteries soars, now might be a good time to revisit some commonly believed lottery "facts" that are strictly fiction.

1. Powerball is a boon for state budgets
In truth, Powerball is just another game that represents a very small slice of state lottery revenue. According to data from the U.S. Census Bureau, lotteries across the United States took in about $62.4 billion in revenue in 2013.

Data from the North American Association of State and Provincial Lotteries and published by the Wall Street Journal implies that only about 9.2% of state lottery revenue came from Powerball ticket sales that year, despite the payment of several large jackpots that led to an increase in ticket sales.

While the numbers may appear large, they shrink with context. In 2013, states earned about $20.4 billion from lotteries after the payment of prizes and administrative costs, a mere fraction of the $1.19 trillion spent by state governments during the same period. 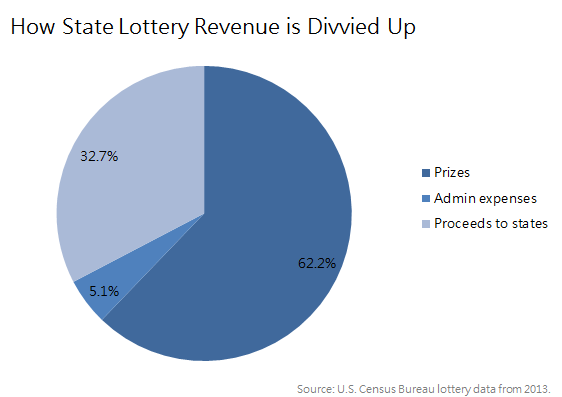 2. Lotteries fund education
Though it's commonly held that the lottery is nothing more than a public school fundraiser, states are free to spend the income as they desire.

In California, profits are sent to the state's Education Fund, where the proceeds flow primarily to K-12 schools, followed by community colleges, and the CSU Chancellor's Office, which audits the funding throughout the state. How the proceeds are spent from there is a bit of a mystery. The California lottery website notes that county offices, school districts, and administrators make the ultimate decision on where each dollar goes. "The Lottery is not involved in the decision-making process," it says.

Meanwhile, in Indiana, profits supported the Build Indiana Fund, which apparently helps fund projects gas taxes would ordinarily fuel. A smaller portion is sent to fund police, firefighter, and teacher retirement funds. It's somewhat ironic that lotteries, often viewed as a benefit to the education system, help Indiana's most experienced teachers retire from the classroom.

State lotteries frequently publish financial statements on their websites, which can make for interesting reading to discover how your state allocates its lottery profits. There is no hard and fast rule for how much lottery revenue flows to public schools; it varies by state.

It's quite clear that barring the sale of a big winning ticket -- which typically results in a bonus payment for convenience stores -- there isn't much to be made peddling $2 tickets to hopeful crowds. Lotteries, much like gasoline, are low-margin products that retailers sell to stoke sales of higher-margin impulse products like coffee, sodas, and candies.

One Alabama gas station owner estimated that the $1.3 billion Powerball might result in 5,000-6,000 ticket sales, compared to an average of 700 to 800 tickets sold on an average drawing day. Admittedly, that says nothing of whether the increase in sales will be driven primarily by more customers, or more lotto sales per customer.

Playing the lottery will always be a losing proposition. In 2013, states paid out about 62.2% of every dollar taken in as prizes, leaving the average player in the hole. So if you do decide to play your odds in Wednesday's $1.3 billion drawing, I'll leave you with just one piece of advice.

Whether you buy one ticket or 10,000, the odds of winning remain astronomical. From zero tickets to one ticket, your odds of winning increase by an infinite amount. After that, each dollar spent is just another dollar almost certainly wasted.