Please ensure Javascript is enabled for purposes of website accessibility
Log In Help Join The Motley Fool
Free Article Join Over 1 Million Premium Members And Get More In-Depth Stock Guidance and Research
By Adam Levine-Weinberg - Jan 11, 2016 at 10:25AM

Nordstrom's profitability is under pressure because it is investing heavily in growth initiatives -- just like Amazon.com.

Since rising above the $80 mark last March, shares of upscale retailer Nordstrom (JWN 3.64%) have been decimated. The stock hit a new multi-year low on Friday, closing at $46.24: down more than 40% from its peak. 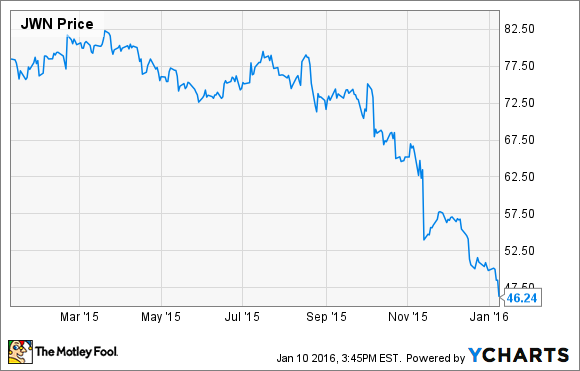 This left Nordstrom stock trading for less than 13 times forward earnings. While the department store segment more broadly has been under pressure in the past year, Nordstrom's bargain valuation flies in the face of its numerous significant growth opportunities.

Indeed, Nordstrom may not have the sales upside of fellow Seattle retailer Amazon.com (AMZN 1.26%), but its strategy is not all that different -- it's just on a smaller scale.

Investing for growth
Amazon.com has achieved a stunning valuation of roughly $300 billion despite producing negligible profits. In 2014, it lost money, and analysts believe it earned a little less than $1 billion in 2015.

Amazon.com is barely profitable due to heavy growth investments.

The reason for Amazon's extraordinarily high valuation is that investors understand the company is investing heavily to drive long-term growth. Revenue has more than tripled since 2010, yet net income has actually declined. However, as Amazon continues to grow over the next decade or two, its profit margin should gradually rebound, driving stellar earnings growth.

Like Amazon, Nordstrom has been investing heavily in growth recently. Capital expenditures have risen from around 4% of sales in 2011 and 2012 to 6% of sales in 2013 and 2014, and then to around 8% of sales in 2015. That has weighed on free cash flow, and it has also been a drag on earnings for the past couple of years.

To be sure, Nordstrom isn't growing as quickly as Amazon. Its sales have risen a little more than 50% in the last five years, compared to more than 200% for Amazon. That said, Nordstrom hasn't been plowing all of its profit back into growth initiatives. It has produced an operating margin of more than 8% over the past year, compared to less than 2% at Amazon.

Profit growth will come
While some investors certainly think Amazon.com stock is too expensive at more than two times forward sales, and more than 100 times forward earnings, almost everyone agrees that Amazon will see strong profit growth in the coming years.

By contrast, pessimism abounds with respect to Nordstrom. Last week, analysts at Morgan Stanley slashed their price target for Nordstrom stock to $45, arguing that the company's profit margin will remain under pressure. With the shares now trading for less than 0.6 times forward sales and 13 times forward earnings, it's clear many investors agree.

However, Nordstrom plans to return to a more moderate level of capital spending of about 5% of sales beginning in 2016. That will allow its investments from the past few years -- in the form of new stores, new technological capabilities, and new e-commerce fulfillment capacity -- to start maturing.

The rapid growth of Nordstrom Rack (from 119 stores in early 2013 to 194 today) and Nordstrom Canada (from zero just 18 months ago to five stores by the end of 2016) and the acquisition of the fast-growing Trunk Club concierge business are also pressuring profitability. All three of these growth businesses should generate rising margins in the next several years.

Looking for accelerating EPS growth
In 2016, Nordstrom's profitability will likely continue to be pressured by the impact of its heavy 2015 capital spending. Its primary source of earnings-per-share growth will be share buybacks.

However, by late 2016 or early 2017, Nordstrom's growth investments should start maturing. As a result, during the last few years of the decade, its sales growth will likely be accompanied by rising -- not falling -- profit margins.

As a result, I expect Nordstrom's EPS to more than double from 2016 to 2020. As its EPS growth rate rebounds into double-digit territory, Nordstrom stock is likely to surge higher, eclipsing its 2015 high within a few years.