Qualcomm stock had a horrible 2015. Will a new year reverse its slide? Not unlike you and me, many publicly traded companies want a fresh start to the new year. But instead of losing weight or quitting a bad habit, their objective is to improve performance and shift the narrative that may have weighed on their stock price in 2015.

One company that fits this profile is Qualcomm (QCOM -3.59%).

Shares of the semiconductor manufacturer underperformed last year, amid stiff competition from lower-cost mobile chipmakers in emerging markets, a $975 million settlement with China over antitrust violations, and the ongoing consumer shift to the Qualcomm-less Apple iPhone. Even worse, Qualcomm's flagship mobile chip in 2015, the Snapdragon 810, was reportedly prone to overheating. This led Samsung (NASDAQOTH: SSNLF) to abandon the chip in favor of its internal Exynos chipset in its Galaxy S6 iteration.

The net result? Against a 1.9% drop in revenue across the industry, Qualcomm reported a 17.4% drop, according to Gartner. Wall Street took notice, sending its shares down by nearly 33%, versus a 3% decline in the broader semiconductor space. 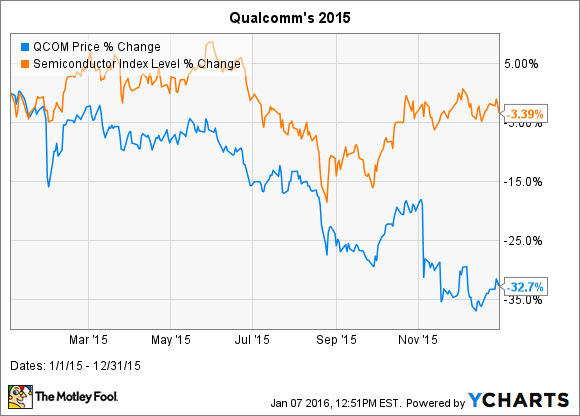 Can Qualcomm turn things around?
From an operational perspective, Qualcomm should focus first on fixing the overheating issues -- or at least the perception thereof -- in its next-gen flagship Snapdragon 820 chip. The company should then attempt to win back the socket in Samsung's next-gen Galaxy S7 models -- which, if the rumors are true, it's in the process of doing. Early reports say Samsung will dual-source its chips, bringing a version powered by the Snapdragon 820 and one powered by its Exynos chip. Samsung's use of Qualcomm's chip would presumably boost the latter's revenue growth. It could also encourage other handset makers to follow suit.

While Samsung purportedly demanded exclusive access to the Snapdragon 820 until April, that may not be the case. At a CES press conference, Qualcomm CEO Steve Mollenkopf announced the Snapdragon 820 would power a Chinese phone -- the Letv Le Max Pro. It's unlikely this phone will meaningfully contribute to Qualcomm's top or bottom lines, but it suggests that rumors of an exclusivity clause were bogus. It also points toward a thawing of relations between China and Qualcomm, as the latter went out of its way to state it was seeking "constructive dialogue with regulatory bodies" when the company announced that it would not split up its chip and licensing businesses.

The mobile-semiconductor business has sectorwide headwinds, which of course Qualcomm won't be immune from, like slower-growth smartphone sales and falling demand for tablets. It's possible for new-gen devices like drones to eventually add to Qualcomm's bottom line, but it seems unlikely they'll replace tablet and smartphone revenue in the short term.

A positive headwind for Qualcomm, however, is that developing markets (China and India) are migrating to mid- and high-level devices with higher-end processors, as performance is now replacing cost as the primary buying decision. It's possible for Qualcomm to offset tough industry headwinds by increasing its market share within the segment, and especially within Android-based OEMs.

In the end, 2015 was a horrible year for the company compared to the overall industry, but I believe the new year will be better for CEO Steve Mollenkopf.