Please ensure Javascript is enabled for purposes of website accessibility
Log In Help Join The Motley Fool
Free Article Join Over 1 Million Premium Members And Get More In-Depth Stock Guidance and Research
By Adam Galas - Jan 12, 2016 at 10:15AM

Wall Street has hammered Williams Partners over the past year, sending its yield soaring. Find out why dividend investors should avoid this yield trap.

Warren Buffett once said, "Only when the tide goes out do you discover who's been swimming naked." I think the worst oil crash in decades is a prime example of showing how many energy companies and MLPs have overextended themselves, becoming too dependent on cheap access to debt and equity growth capital.

Now that the good times have come crashing to a halt, investors in even midstream MLPs such as Williams Partners (NYSE: WPZ), once thought to be a highly dependable high-yield income source because of their tollbooth business models, are paying a heavy price for this dependence. 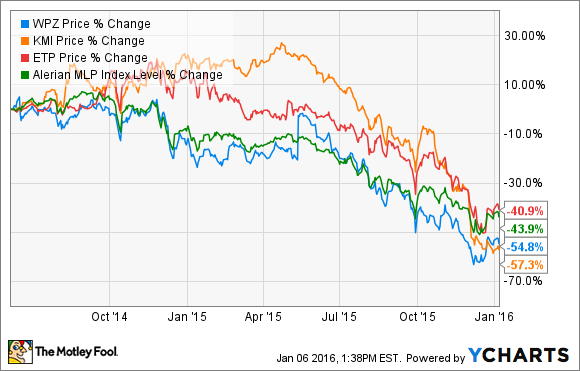 Highly leveraged midstream operators such as Williams Partners, and its competitors Kinder Morgan (NYSE: KMI), and Energy Transfer Partners (NYSE: ETP), have been crushed over the past 18 months, resulting in soaring yields that may seem enticing to income investors.

However, there are three reasons dividend lovers should avoid yield traps such as Williams Partners -- reasons that could result in massive capital losses.

Not only did Williams Partners fail to cover its payout in 2015, but it also has a poor track record of doing so even when oil prices where north of $100. Specifically, in the first three quarters of 2014 -- before it was merged with Access Midstream -- its coverage ratio averaged just 0.93.

The reason for Williams' troubles was the plunging price of natural gas liquids, or NGLs, which have been declining for years thanks to a boom in production.

In recent quarters, Williams' coverage ratio has been slowly climbing. However, the fact that the payout is now technically sustainable may not be enough to save it from a drastic cut or even outright suspension should energy prices not drastically recover.

Williams Partners has a mountain of debt that results in a leverage ratio nearly triple that of the industry average of 6.6. With that much debt, it will be hard to take on any more to finance its $30 billion slate of projects.

With its balance sheet already so overleveraged, creditors may, at some point, no longer be willing to keep lending Williams billions of dollars to fund its growth and refinance its existing debt at attractive rates. Unfortunately, with its unit price in the toilet, raising capital via equity isn't that attractive an option, either.

With debt and equity becoming less attractive financing options, it's also affecting the company's cost of capital and overall returns. If it needed to issue debt at higher interest rates, it would reduce Williams' return on invested capital and increase its cost of capital. Having capital costs that high will make it hard to justify making an investment in that backlog of projects.

This is a problem shared by Energy Transfer Partners, whose WACC is also above its return on invested capital. Less leveraged MLPs such as Enterprise Products Partners -- which just issued distribution guidance for 2016 of 5.2% expected payout growth -- have far less need to turn to equity or debt markets to keep growing thanks to their ability to retain massive quantities of excess cash flow.

This year may very well find Williams Partners forced to follow Kinder Morgan's lead and slash or even suspend its payout. Doing so could free up more of its DCF to fund its backlog or pay down debt.

Bottom line: Don't reach for yield, but for quality instead
Williams Partners has well earned its sky-high yield, and Wall Street as well as income investors are right to doubt the payout's ability to survive the energy crash. With a mountain of debt and a rock-bottom unit price, its access to growth capital is severely restricted, thus preventing it from tapping its enormous project backlog to grow its way out of trouble.

Dividend lovers would be far better served buying better managed, more conservative midstream MLPsthat have far stronger balance sheet and lots of excess cash flow to fund the vast majority of their backlog with less reliance on debt or equity markets. This advantage makes their payouts more sustainable even should energy prices stay low for years.

Adam Galas has no position in any stocks mentioned. The Motley Fool owns shares of and recommends Kinder Morgan. The Motley Fool recommends Enterprise Products Partners. Try any of our Foolish newsletter services free for 30 days. We Fools may not all hold the same opinions, but we all believe that considering a diverse range of insights makes us better investors. The Motley Fool has a disclosure policy.