Please ensure Javascript is enabled for purposes of website accessibility
Log In Help Join The Motley Fool
Free Article Join Over 1 Million Premium Members And Get More In-Depth Stock Guidance and Research
By Beth McKenna - Jan 12, 2016 at 8:00AM

Here's why two biotech stocks, one optical networking company, and one multi-level marketer were the top-performing small company stocks in 2015.

While the overall stock market was flat in 2015, there were some huge winners, especially among smaller company stocks. That's because it's easier for such companies to grow revenue and earnings faster on a percentage basis than it is for larger companies -- and earnings growth largely drives stock-price performance. The drawback is that smaller companies can be more speculative, so they tend to also dominate lists of the worse-performing stocks. 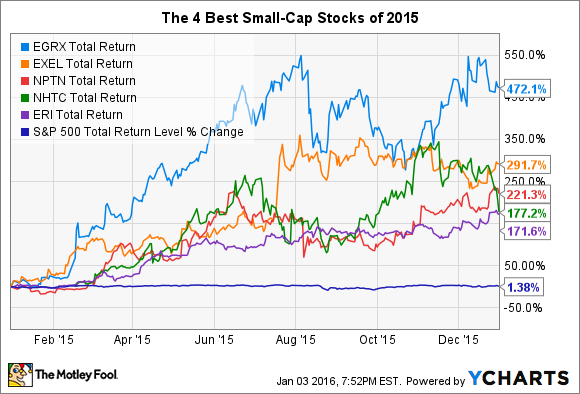 1. Eagle Pharmaceuticals -- up 472%
Eagle Pharmaceuticals focuses on developing and commercializing injectable products primarily in the critical care and oncology areas in the United States. The Motley Fool CAPS players are enthused about the stock of this NJ-based company that went public in 2014, awarding it five (out of five) stars.

The stock took off in February when Eagle scored a huge licensing win from Teva Pharmaceuticals (TEVA 1.08%), which involves Teva exclusively licensing Eagle's Bendeka, a bendamustine rapid-infusion drug for treating chronic lymphocytic leukemia and indolent B-cell non-Hogkin's lymphoma. This netted Eagle $30 million -- a huge sum relative to its total revenue (see chart below). Eagle scored a $15 million milestone payment (which will show up on a chart once Eagle reports fourth-quarter results) when the drug won regulatory approval in early December, is eligible for an additional $75 million in milestone payments, and will receive a 20% royalty on sales of Bendeka. 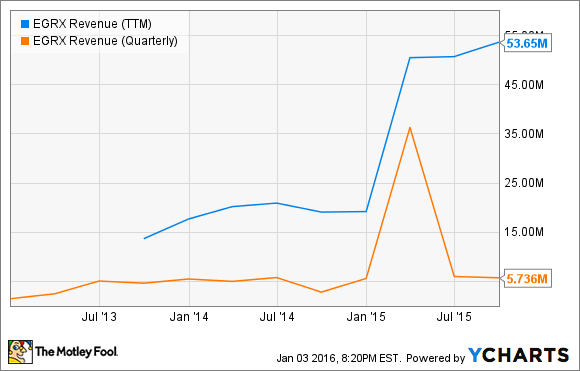 Eagle notched another FDA win in late December, when it received the green light for Docetaxel Injection, Non-Alcohol Formula, for the treatment of breast cancer, non-small cell lung cancer, prostate cancer, gastric adenocarcinoma, and head and neck cancer. It exclusively licensed the drug from Teikoku Pharma USA in October 2015.

Investors are surely looking forward to Eagle potentially adding another source of revenue in 2016. The FDA is expected to make its approval decision in March on the company's ready-to-use bivalirudin, a formulation of The Medicines Company's Angiomax.

Eagle Pharmaceuticals sports some compelling numbers: It has no debt; insiders own a solid 9.8% of shares; and analysts expect 2016 earnings per share to skyrocket 909% over last year's levels. The stock currently trades at 13.4 times forward earnings. Like all small biotechs, however, a single FDA decision or late-stage trial result could send the stock soaring or plummeting.

2. Exelixis -- up 292%
San Francisco-based Exelixis could be the poster child for the volatility inherent in small biotechs. The stock lost 77% of its value in 2014 due to its primary drug, Cometriq, failing in a late-stage prostate cancer trial.

Several events centered on two drugs were responsible for the company's reversal of fortunes in 2015. In July, Exelixis released strong results from a phase 3 trial of a reformulation of Cometriq for treating renal cell carcinoma. Cometriq reduced the risk of disease progression or death by 42% compared with Novartis' widely used kidney cancer drug Afinitor.  In November, the FDA approved Cotellic -- licensed to Roche -- for treating advanced melanoma in combination with Roche's Zelboraf.  European regulators approved the drug combo soon thereafter.

Investors are no doubt looking forward to 2016, when the FDA should make another decision on Cometriq. Exelixis filed for an FDA approval for the kidney cancer drug in December.

While there's some reason to be enthused about Exelixis, investors should proceed with caution, as the ride is likely to continue to be a rollercoaster. As one might expect for a small biotech that's playing in the ultra-competitive cancer drug arena, short interest is a high 23% of the float.

3. NeoPhotonics -- up 221%
NeoPhotonics Corporation primarily designs and manufactures hybrid photonic integrated optoelectronic modules and subsystems for bandwidth-intensive, high-speed communications networks. In 2015, the stock of this San Jose, Calif.- based optical networking player reached its highest level since soon after its 2011 IPO.

NeoPhotonics is benefiting from some industrywide trends, as well as its solid execution in 2015. Telecommunications companies have been upgrading their networks in the U.S. due to the explosion in bandwidth-hogging activities, such as video streaming. Additionally, investors are expecting that NeoPhotonics' fourth-quarter 2015 and the next couple years will reflect robust demand from China for the company's 100-gigabyte networking components. That's because mobile networks in China are starting multi-year network build outs, according to NeoPhotonics CEO Tim Jenks on the second-quarter 2015 conference call.

Analysts are projecting 45% earnings-per-share growth for the current year, about 17% EPS growth next year, and an average of 15% EPS growth over the next five years. The stock is pricey on a trailing-twelve-month price-to-earnings basis -- with a P/E of 84 -- though reasonably valued on a forward basis with a forward P/E of just 20 according to S&P Capital IQ.

4. Natural Health Trends Corp. -- up 177%
Natural Health Trends Corporation distributes beauty, lifestyle, wellness, herbal, and home products under its NHT Global brand. In short, it's a multi-level marketing operation, which makes for one risky stock. Growth for such operations is dependent upon attracting an ever-increasing number of customers/distributors to distribute their products.

Natural Health Trends' stock soared in 2015 because the company posted strong growth -- revenue increased 114% year-over-year in the first nine months of 2015, while EPS jumped 133%. However, the stock's been in a freefall since Dec. 28, losing 35% of its value in just five trading days to Jan. 4. Investors are no doubt concerned about future growth prospects. In addition to growth being subject to the risks inherent in a multi-level marketing operation, it's also highly dependent upon the Chinese economy because nearly all revenue -- 94% in the most recent quarter -- is generated in Hong Kong. China's economy has been slowing and its stock market plummeting, which will likely increasingly negatively affect consumer buying behavior.

Beth McKenna has no position in any stocks mentioned. The Motley Fool recommends Exelixis and Teva Pharmaceutical Industries. Try any of our Foolish newsletter services free for 30 days. We Fools may not all hold the same opinions, but we all believe that considering a diverse range of insights makes us better investors. The Motley Fool has a disclosure policy.