Times are tough for diversified industrials, and Eaton Corp. (NYSE:ETN) has not been spared. Its revenue capture is less geographically diverse than that of many of its peers -- it earned 52% of its 2014 revenue in the U.S. -- so that currency effects have been less painful for it than for others. For the full year it expects currency effects to reduce revenue by 5%.

However, Eaton expects organic growth only from two of its divisions in 2015, and total organic revenue to decline by 1%. Excluding hydraulics, nine-month operating income would have been down only 0.6%. Given economic conditions, and some fairly significant expenditure on restructuring, this is not bad performance. Hydraulics is Eaton's problem child: After an already difficult 2014, the collapse in demand for oil, gas, mining, construction and agricultural equipment (nearly half the division's 2014 sales) has been crippling. Given this customer base, the division will not recover soon: The other half of its customers are machine-builders and other sorts of capital equipment producers, none of whom are seeing healthy demand. The stock market has not been at all forgiving: 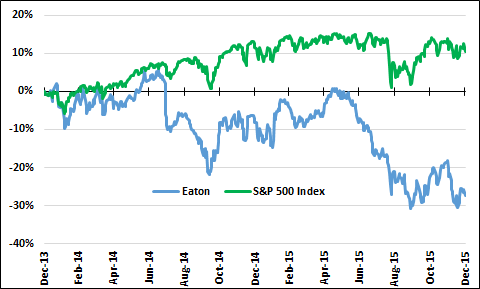 Meanwhile, aerospace is going from strength to strength. Although nine-month revenue declined, on a constant-currency basis it rose 3%. With 40% of its 2014 revenue coming from commercial aircraft manufacturers, whose order books are bursting at the seams, its outlook is clearly favorable. Another 35% of its revenue derives from aftermarket sales and service, a highly profitable and stable revenue source. Sales to military aircraft manufacturers (14%) are less certain, since several programs, notably the F-35, are controversial, and may not deliver as many aircraft as expected. However, Eaton's share of new programs has grown considerably, so that whatever deliveries occur will produce more revenue than in the past. The division's remaining revenue comes from business aircraft. After a strong 2014, this market grew moderately in 2015 -- but unlike so many end-user markets for industrial products, it did grow. 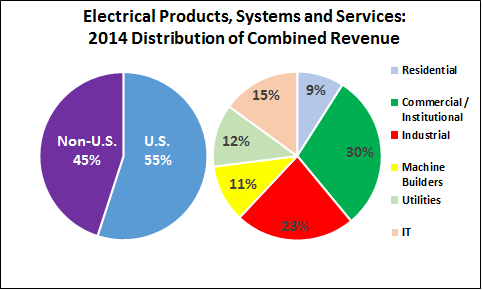 Systems and Services provides contracting and engineering support for major installations as well as aftermarket service. Demand for major capital projects of the sort that buy these systems and services has not been strong, and solid growth in commercial construction (not a substantial customer at the best of times) is not sufficient to offset this. On the other hand, demand for Eaton's electrical products, which are used in almost all devices that use electricity, as well as throughout the high-, medium-, and low-voltage distribution networks that power them, has been quite healthy.

The Vehicle group saw a 1% decline in nine-month organic revenue, but a 1.4-percentage-point increase in its operating margin more than offset this. It provides a very wide range of products, among them drivetrains, clutches, and differentials, primarily to commercial vehicle manufacturers. This market has softened in 2014, particularly in Q3:

Although nine-month operating income rose slightly, Q3 operating income declined because of the extraordinary order-book comparison with October 2014, but especially because of a $27 million restructuring charge. Full-year results are likely to erase the nine-month income gains. However, over the longer run, U.S. heavy truck sales are forecast to grow 4.5% annually through 2024, which should create a favorable background for this business in coming years.

The Vehicle division is not the only one affected by restructuring and similar charges. In 2015 Eaton will have charged $123 million against earnings and it expects to charge an additional $30 million in 2016. Netting benefits against costs, the program had an effective cost of $73 million in 2015, but it is expected to produce benefits of $65 million in 2016 and $255 million in 2017. These figures represent 3.1% and 12% increments on annualized nine-month 2015 pre-tax income. Pension obligations will decline by $30 million in 2015 and are expected to be down $218 million in 2016 -- providing increments of 1.4% and 10.3%, respectively. A $240 million debt retirement in January 2016 will reduce interest costs by $3.0 million over the next 11 months and $3.3 million in 2017 -- adding 0.1%. None of these are extraordinary amounts, but assuming no change in underlying operating income, together they come to a 30% increase in pre-tax income by the end of 2017.

The operating outlook for 2016 is no better, and possibly weaker than 2015. Hydraulics has probably taken its biggest hit from its customers' travails, but it can still expect to decline further. Electrical Systems and Services will probably deteriorate somewhat, too. Aerospace should continue to increase earnings and Eaton's other divisions can probably expect to be stable or improve. However, by comparison with other diversified industrials, Eaton will suffer less from foreign currency depreciation. Year-over-year comparisons for Canadian and Latin American revenues will be negative throughout 2016, but comparisons with the euro can be expected to cease being negative from the end of Q1, and with Asia-Pacific currencies from Q3. Currency effects, which reduced 2015 revenue by 5%, will probably shave off 2% to 3% in 2016. 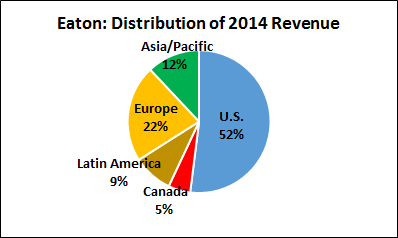 All this suggests fairly modest income gains for Eaton in 2016, which will be flattered by share buybacks. Earnings should increase much more significantly in 2017, by which time Hydraulics can be expected to stabilize. Since the recovery in 2017 is not dependent on an economic turnaround, but will be largely a function of internal factors that are more directly under the company's control, Eaton's discount relative to other diversified industrials is rather puzzling. While it may not be an outstanding value at current prices, its annual dividend of $2.20 (currently yielding 4.2%) is safe, and offers some compensation while investors wait for value to be created. While it may be possible to buy it more cheaply in the next few months, Eaton belongs on investors' watch lists.