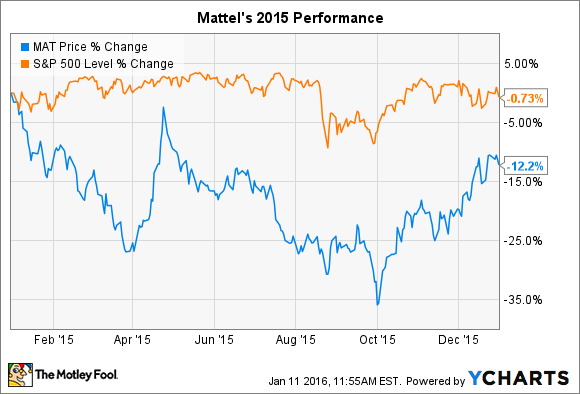 The drop ensured that shareholders trailed the broader market, which fell by just 1% last year. Mattel also significantly underperformed rival Hasbro (NASDAQ:HAS) and its 22% gain in 2015.

So what: A comparison of the two companies' latest business results shows why their stocks turned in such different performances last year. Hasbro posted 9% sales growth in the third quarter on strong demand for its core franchise brands that include Nerf, Monopoly, and Play-Doh. In contrast, Mattel's sales shrunk 4% in Q3 to bring revenue down 8% in the nine months ended Sept. 30. And profits tell a similar story: Mattel's net income fell 56% to $154 million through Q3 while Hasbro's has climbed 8% higher. 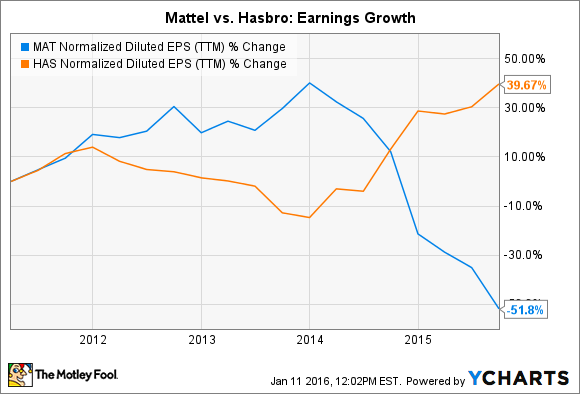 Mattel recently lost its exclusive deal with Disney (NYSE:DIS) for the license to the entertainment giant's Disney Princess brand that includes Frozen-themed merchandise. That lucrative contract went to Hasbro instead, and the switch has left a gaping hole in Mattel's portfolio while boosting its competitor's results.

The good news is that Mattel's flagship Barbie franchise is starting to show signs of life. Sales tied to the doll brand were up slightly heading into the holiday quarter -- after diving by 16% in 2014.

Now what: Mattel CEO Chris Sinclair has a turnaround plan in place that includes a big-picture reshaping of the culture to focus on creativity while at the same time executing on initiatives such as promoting core franchise brands, expanding in emerging markets, and cutting costs.

The executive team is making good, early progress on those priorities, he said. However, significant sales and profit growth over the next year will be hard to come by, particularly with nothing of comparable size to replace lost revenue from Disney merchandise. "It's clear we will continue to have significant challenges with the loss of Disney Princess," CEO Sinclair told investors in October.

Consensus estimates forecast a 5% sales drop for Mattel and a near 10% profit boost when it posts earnings results for the critical holiday-season quarter in early February.