With a very tough year in the rearview mirror, the storage specialists can only hope that the next swing in this cyclical industry is around the corner.

What: Shares of SanDisk (NASDAQ: SNDK) fell 22.4% in 2015, according to data from S&P Capital IQ. Fellow data storage specialists Western Digital (WDC -2.11%) and Seagate Technology (STX) plunged 45.8% and 44.9% lower, respectively. It was a tough year for storage stocks in general.

So what: SanDisk's massive loss actually includes a 60% gain in October, where Western Digital agreed to buy the solid-state storage specialist for nearly 35 times SanDisk's trailing earnings. Without that buyout premium, SanDisk investors would have faced an even larger negative return in 2015.

You'll note, of course, that the deal did nothing to lift Western Digital out of its year-long swan dive. All three companies suffered from the same overarching market trends: Plunging PC system sales, the never-ending march toward lower component prices, and weak demand even from the enterprise sector. 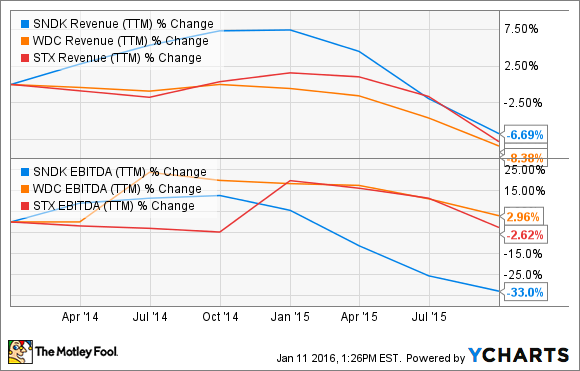 Now what: Western Digital's buyout of SanDisk can be seen as two sinking ships trying to stay afloat by clinging together.

The reality is that data storage of all kinds is becoming a commodity. Charging a premium for higher storage density or faster access used to juice the margins and support revenues even in the face of rapidly falling prices per megabyte, then gigabyte, terabyte, and beyond. That's not really the case right now.

The traditional hard drive space is down to two strong providers, namely Western Digital and Seagate, plus fringe player Toshiba. Hard drives are going obsolete, and the newfangled solid state drives are still too expensive.

Eventually, this snarled market environment will sort itself out. Western Digital, with SanDisk's solid-state expertise under its wing, will start building Flash-based storage into every device it sells. Seagate must be working feverishly on its own Flash technologies, perhaps looking around for a billion-dollar acquisition of its own in that space.

Look up "cyclical" in a dictionary, and you might just see a picture of a hard drive. This market goes in waves, and is currently on a downswing after a few strong years. Will 2016 be different? Hard to say, but there will eventually be a light at the end of the tunnel.

In 2015, that light was still far away, covered up, and turned off.

Anders Bylund has no position in any stocks mentioned. The Motley Fool owns shares of Western Digital. Try any of our Foolish newsletter services free for 30 days.