Please ensure Javascript is enabled for purposes of website accessibility
Log In Help Join The Motley Fool
Free Article Join Over 1 Million Premium Members And Get More In-Depth Stock Guidance and Research
By Reuben Gregg Brewer – Jan 12, 2016 at 8:15AM

After halting quarterly distribution hikes in the third quarter, a 2016 increase is up in the air

Alliance Resource Partners (ARLP 6.43%)) is, by far, the best looking operator in a downtrodden industry. But even the best-positioned player has admitted things are getting worse, leading it to put a halt to its long streak of quarterly distribution hikes. Now that the increases have stopped, what should you expect for 2016?

Technically speaking
In the third quarter, Alliance announced that it was holding the line on the distribution, at $0.675. The company has been upping that payout quarterly since mid-2008, so this was a big change. But there's a little wrinkle to work out before we address the issue of a distribution hike in 2016. 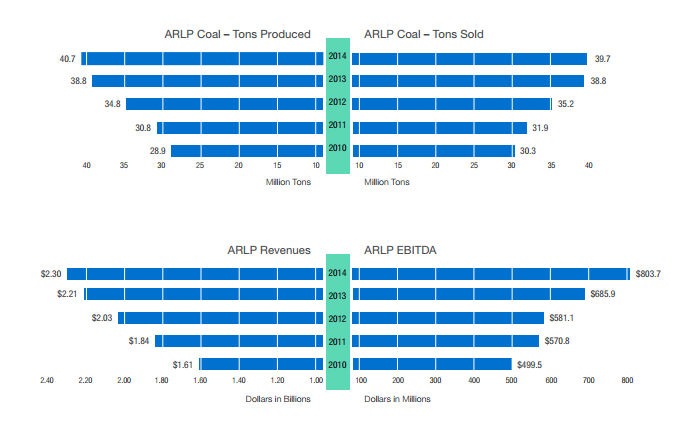 Alliance's results have been heading up through the coal downturn. Source: Alliance Resource Partners.

How much room is there?
When looking at the potential for a distribution increase, you need to get a feel for how much room there is between what Alliance is paying out and the cash it has available to pay out. For example, fellow limited partnership NuStar Energy L.P. (NS 5.35%), a midstream oil and gas player, was pleased to trumpet that it had a distribution coverage of 1.05 times in the third quarter.

I say "pleased" because, just a few years ago, it wasn't covering what it paid out. In fact, between late 2011 and mid 2014, it hadn't been able to cover the payout -- in an industry that was seeing increased demand!

The question now on your mind should be: How bad is it at Alliance, which operates in the out of favor coal industry? The answer is that Alliance covered its distribution by a robust 1.66 times in the third quarter. That's a huge margin of safety that most other partnerships, regardless of their industries, don't enjoy. Not only does Alliance's distribution seem well supported, but there's plenty of room for an increase if the business holds up.

That's the problem
That's the real problem here. Alliance's business, after having bucked the industry downtrend for so long, is finally starting to show signs of weakness. In fact, along with the dour distribution news, CEO Joseph Case pretty much telegraphed that Alliance would be looking at selling less coal in the near future. That means Alliance's coverage ratio is probably going to fall, not increase.

With so much extra room between the disbursement and the ability to disburse, Alliance might decide to up the distribution at least once next year so that it can continue to claim that an increase has occurred in every calendar year. True, it doesn't need to do this because of the timing issue noted above; but that little semantic issue often matters a great deal to companies with long histories of increasing their distributions. 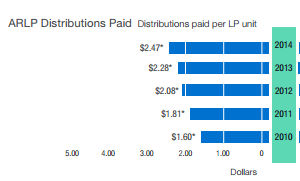 The issue to watch will be how bad the coal business gets. In fact, I wouldn't expect Alliance to even consider a distribution hike until the second half of 2016. The fourth-quarter payment would be the one I'd be betting on, too, so the company can afford itself as much time as possible to gauge how bad things might be getting.

The big question
Will it or won't it? It's too soon to tell. Alliance doesn't need to hike to keep its annual increase streak alive.

Let's be honest, however: Not increasing is kind of a weak way to say you've increased the distribution every year. Moreover, assuming the coal industry doesn't fall out of bed (any more than it already has, anyway), Alliance appears to have plenty of leeway to afford an increase. It's really prudence that's keeping it on the sidelines.

This suggests that the partnership is going to wait until the last moment possible to make the call, just to be sure it doesn't overstretch. In other words, watch the coal miner's business. If it holds up reasonably well, I'd expect a hike late in 2016. If it weakens materially, however, don't expect anything at all.