This dividend only has one way to go.

Since we started ConocoPhillips as an independent E&P we thought the way to create value in the business was a combination of moderate growth and strong payouts back to our shareholders in the form of a dividend. We think of a dividend as something that really should only go one direction and there can be some variability in the rate at which dividend increases. But the key to a dividend is to have it be consistent and to grow it over time. So we haven't really had significant discussion to talk about trying to adjust the dividend. It's an important part of our value proposition. It puts a lot of discipline into the system to have that dividend.

He makes two key points. First, the company sees the dividend as a discipline. The dividend commitment level makes ConocoPhillips more disciplined with its capital allocation decisions because those decisions are framed around protecting and growing the payout. Because of this the company remains disciplined not to take on too much risk or to stretch its resources too thin. It's why the company has maintained a strong investment grade balance sheet and isn't chasing growth for the sake of growth.

The second point Sheets makes is that the company believes that dividends should grow over time. That's why the company made it a point to increase its payout by $0.01 per share last year, because, it believed that "this was an important message for our shareholders" according to CEO Ryan Lance. It's a message that will likely be repeated in 2016 with investors more than likely seeing another similar $0.01 per share dividend increase.

Why ConocoPhillips is in the position to raise its dividend
There are two core reasons why ConocoPhillips can raise its payout in 2016 when many of its peers are reducing theirs. First, it has much lower leverage. While ConocoPhillips has a gargantuan amount of debt on its balance sheet, it's actually moderate for a company of its size. For example, when we compare ConocoPhillips' net debt to its overall enterprise value, it's a much smaller percentage than it is for rival Marathon Oil (MRO 0.63%), which was initially built following a similar blueprint. 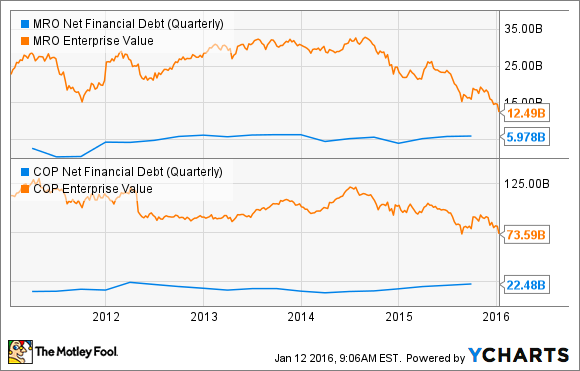 The second major reason why ConocoPhillips is in the position to raise its dividend is because 2016 marks the end of the company's major capital investment phase. As a result, the company has a number of big projects that will ramp production in 2016 and 2017, which will result in a lower capex spending going forward and more cash flow from that production. Because of this the company believes it can be cash flow neutral in 2017 irrespective of the oil price.

Investor takeaway
ConocoPhillips is a firm believer that a dividend should only go one way and that's up. Those aren't mere words from management, but are backed by the company's strong balance sheet and the fact that its putting the finishing touches on a major expansion phase. Suffice it to say, investors should expect a raise in 2016, even if it is very modest.