Corning (NYSE:GLW) is a darling among investors who favor so-called "quality" stocks -- or at least it once was. But its equity has displayed little quality recently. Over the last five years, its shares have managed to lose 57 percentage points relative to the S&P 500 -- 18 of them in 2015. This is reflected in its 2.6% dividend yield and a price-to-earnings ratio of 13.2 times Yahoo! Finance's consensus 2015 earnings estimate: Investors have been disappointed too often to sustain a revaluation. 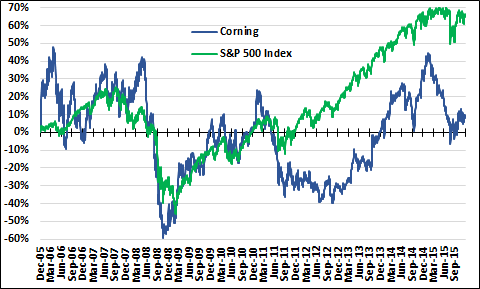 Corning may not be as complacent as its upstate New York neighbor Eastman Kodak was until the latter's bankruptcy reminded it that there is, indeed, a world beyond its headquarters. But the similarities are disturbing. Given Corning's earnings volatility, which share repurchases cannot mask, its self-regard is difficult to fathom.

However, Corning's shareholders might have reason to hope that their wait for acceptable performance is over. On Dec. 11, Corning announced that it had reached agreement with Dow Chemical (NYSE:DOW) to restructure the ownership of Dow Corning. Dow will absorb the silicone businesses, while Dow and Corning will each retain 40.25% of Hemlock Semiconductor, its polysilicon operation (19.5% belongs to Shin-Etsu Chemical). Hemlock had 2015 revenue of about $1 billion and income of $160 million. The transaction has been structured so that Corning will receive $4.8 billion virtually tax-free. It has given no indication of its plans for this windfall, but $4.8 billion will buy plenty of something, whether it is Corning's own shares, R&D, a new plant, or acquisitions. It is likely to be spent on a combination of them.

Corning will no longer receive income from Dow Corning -- the approximately $168 million it accounted for by the equity method in the first nine months of 2015 would be reduced to $64 million from Hemlock. Based on nine-month 2015 data, the transaction will reduce Corning's income by 9.3%, although interest on $4.8 billion would cut that to about 5%.

It is unlikely that Corning will park $4.8 billion in the money market permanently. Corning was already committed to a substantial buyback program: In the first nine months of 2015 it purchased 98 million shares for $1.9 billion, reducing shares outstanding by 5.8%. On Oct. 27 it announced that it will return $10 billion to shareholders over the next four years, including a 10% annual dividend increase and additional repurchases. This implies quarterly dividends of at least $0.135 by the end of 2019, amounting to $3 billion cumulatively on the current share basis. So Corning will have somewhere around $7 billion available for repurchases, implying a reduction in shares outstanding by 22.8% at current prices. This is quite generous as it is: Additional repurchases are hardly called for.

In the same announcement it said that over the next four years it would invest $10 billion in R&D, capital projects, and acquisitions. Corning already spends 8.2% of its revenue on R&D, compared with 6.9% at DuPont, 5.5% at 3M, and 2.8% at Dow Chemical. Maintaining R&D spend at that level will absorb $3 billion over the next four years. Although Corning's record of innovation is impressive, its ability to turn discoveries into lasting commercial propositions is less so. Pyrex, which celebrated its centenary in 2015, is the exception that proves the rule: Most of Corning's inventions seem to become commoditized within 10 years of introduction.

Further gold-plating its R&D budget is unlikely to be a sound investment. The problem lies in the nature of its products: Most of them cannot be protected effectively by patents, and the more successful they are, the greater the incentive for competitors to copy them. Their chemistry is obvious to anyone with a laboratory, and experimentation will reveal their manufacturing secrets. Pyrex remains a viable product because of the strength of its consumer brand, but most of Corning's products are unbranded goods sold to businesses. They make minor contributions to its customers' value added, and even when branded, the final customer is unaware of them. (Do you even know if your smartphone uses Gorilla Glass?) Virtually every commercially successful Corning innovation eventually encounters price competition. What Corning needs is not a big increase in research spend but more efficient conversion of innovation into product, and a faster ramp-up of production, so that it can maximize the opportunities its research creates while they can still command premium prices.

In the first nine months, capital spending jumped sharply over 2014. If it continues at this rate it will absorb $5 billion over four years. It seems unlikely that Corning really requires that level of investment. So it will probably have more than $2 billion of its budget available for acquisitions. It seems likely that a fair portion of the $4.8 billion it will receive for Dow Corning will also be earmarked for acquisitions. In the first three quarters of 2015 it spent $531 million on acquisitions. Clearly, it expects to pick up the pace. Corning's balance sheet is exceptionally strong, (equity was 69.5% of its balance sheet total on Sept. 30) even before the receipts from the sale of 50% of Dow Corning. It can afford a very sizable acquisition, or numerous smaller ones.

The intention of the four-year plan is to focus on:

It will spend 80% of the $10 billion on projects that address at least two of these three headings. Any significant acquisition would have to satisfy this criterion. Displays and optical fiber already produced 40% and 27% of 2014 revenue, respectively, and since then Corning acquired TR Manufacturing in the latter activity. It is probably least likely to acquire in those business segments.

Such discipline is long overdue. One reason for Corning's R&D excesses is lack of focus. Its investors must hope that management, which has no history of major acquisitions, can extend this discipline to financial matters. However, this discipline might be sufficient, if it holds: At least it should protect shareholders from a "transformative" diversification. It is more likely that Corning will make acquisitions in the $500 million to $2.5 billion range than anything larger, because there simply are not many larger potential targets that satisfy its investment criterion. This reduces the likelihood that it would make public market acquisitions, which hold considerable dangers for inexperienced acquirers. This should give Corning shareholders some comfort. However, potential investors still have to take a fair amount on faith: Corning management is finally talking the talk, but it still must prove that it can walk the walk.