A single chart provides unique and surprising insight into the electric-car maker's execution.

There's something investors are missing about electric-car maker Tesla Motors' (TSLA 4.67%) growth story -- and it's crucial. Fortunately, this key insight for Tesla investors can be illustrated in one simple chart.

Model X. Tesla is hoping to ramp up deliveries for its Model X SUV in 2016.

The pros and cons of growth
Tesla is a growth stock in its purest form. This can be a good thing, as investors have a tendency to feel more comfortable owning fast-growing businesses compared to ones in decline. But rapid growth also comes with challenges. And Tesla's growth story isn't an exception to these common problems. Both rapidly rising expenditures and a premium valuation stifle the stock's upside potential and increase risk for shareholders.

While investors should be sure to carefully consider the implications of soaring costs and a speculative valuation, the company's growth also deserves the same sort of careful inspection. And a close look at Tesla's growth reveals an interesting takeaway investors may be missing: Tesla is growing faster as it gets bigger. Yes, its growth is actually accelerating. 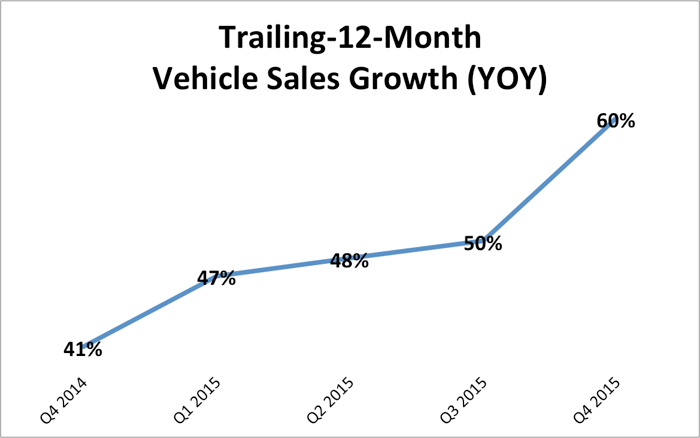 How to look at Tesla's growth
From quarter to quarter, Tesla's vehicle sales growth is somewhat volatile. But as a small yet fast-growing automaker, this sort of volatility is expected. As the company fills its shipment pipelines in new international markets with built-to-order vehicles, batching geographic shipments in the most efficient way the company can manage, orders on a quarter-to-quarter basis are bound to disguise Tesla's broader, year-to-year growth trends. Furthermore, with the company occasionally shutting down the factory for weeks at a time to retool and expand, there's even more reason for large quarter-to-quarter variances

This is why the best way to view the company's growth is on a trailing-12-month basis, as shown in the chart above.

First, it's a testament to Tesla's ability to execute. Most auto industry veterans would have said that there's no way a new entrant could stand up against the experience, capital, and manufacturing prowess of the world's current lineup of large automakers. Building cars is hard -- and building ones good enough to compete in a fiercely competitive auto industry was essentially considered impossible. These auto industry veterans were probably right in their assumptions. But Tesla is succeeding against anyway, growing at more rapid rates the larger the company becomes.

The second reason this narrative of accelerating growth is important is because the stock is priced for growth -- lots of growth. The stock's valuation bakes in management's expectations to grow sales from 50,000 in 2015 to around 500,000 cars per year by 2020. Its accelerating growth makes this wild aspiration seem a bit more believable. Indeed, with growth accelerating recently, the electric-car maker now actually has room for growth to decelerate. Reaching sales of 500,000 units annually by 2020 requires a compound average growth rate of 58%, down from Tesla's year-over-year growth of 60% in 2015. And, going into 2016, it's looking like Tesla's growth in the first of these five years could handily exceed 58%.

So, can Tesla really do the impossible and sell around 500,000 cars per year by 2020? While such a far-out forecast should still be filed as speculation, management's goal is looking more realistic this year than last.