Please ensure Javascript is enabled for purposes of website accessibility
Log In Help Join The Motley Fool
Free Article Join Over 1 Million Premium Members And Get More In-Depth Stock Guidance and Research
By Adam Levine-Weinberg - Jan 13, 2016 at 11:55AM

At less than six times forward earnings, shares of the third-largest U.S. airline are poised for a comeback in 2016.

Even as airline industry profits have soared, many airline stocks have declined sharply in the past year. United Continental (UAL -2.20%) is no exception. While shares of its rival Delta Air Lines (DAL -1.60%) maintained their value last year, United stock has plunged more than 30% since late January of 2015. 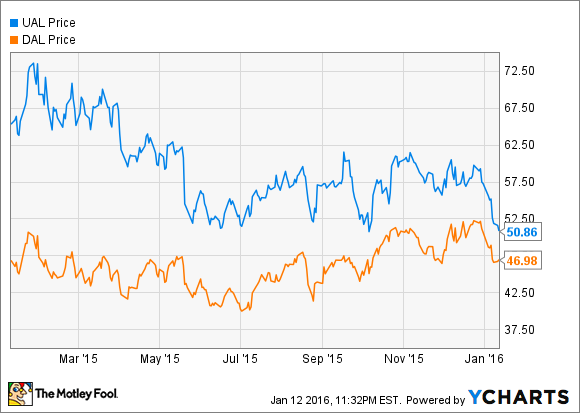 To some extent, United's poor share-price performance can be attributed to expectations getting out of control. United's unit revenue underperformance relative to Delta's is also holding the stock back. Finally, management turmoil clearly isn't helping.

Nevertheless, United Continental remains highly profitable, and is still in a position to produce another record pre-tax profit in 2016. That makes the stock a great buy at its current level just above $50.

Record earnings, but lots of worries
While the final numbers aren't in yet, United Continental recently projected that its adjusted pre-tax margin for 2015 would be in the 11.7%-11.9% range. That would put its adjusted pre-tax profit for the year around $4.5 billion, up from just $2.0 billion in 2014.

That's old hat to investors, though. United stock fell following the investor update because the company cut its Q4 unit-revenue guidance. Originally, the company had forecast that passenger-unit revenue would decline 4%-6% for the quarter. Now, it expects a 5.75%-6.25% drop. Management blamed the shortfall on the November terrorist attacks in Paris, weak travel demand from energy companies, higher capacity, and weaker-than-expected GDP growth.

United's revenue performance looks particularly dismal when compared to Delta Air Lines' solid results. Delta has raised its unit revenue projection three times since the beginning of December, and now expects to report a modest 1.5% decline in passenger-unit revenue for Q4. The revenue deterioration at United Airlines has investors worried that earnings will soon start to decline, too.

This magnifies the existing concern about United's leadership. CEO Oscar Munoz had a heart attack in October -- his second month on the job -- and recently had heart-transplant surgery. He's still supposed to return either in March or early in the second quarter, but many investors are understandably skeptical about whether -- or when -- he will be able to resume his duties.

More profit growth ahead for United
The outlook for United Airlines is not as bleak as it may seem. First, fuel prices continue to plunge. This has dampened United's revenue due to its large concentration of energy-sector customers in Houston, and the impact of lower fuel surcharges on international routes. However, the cost savings are even greater.

United paid an average of $2.02/gallon for fuel in 2015, including hedging losses. For 2016, jet fuel is on pace to be dramatically cheaper, with prices perhaps as low as $1.30 per gallon. That could generate nearly $3 billion in year-over-year fuel-cost savings.

Second, United Airlines will face much easier unit-revenue comparisons beginning in Q2. This should allow it to get its unit-revenue performance much closer to the flat line starting then, if not into positive territory.

Third, share buybacks will provide an additional lever for earnings-per-share growth. United had nearly $3 billion in active share-repurchase authority at the end of Q3 -- enough to shrink the share count by more than 15% at today's stock price. The company appears to have ramped up buyback activity last quarter, and it will likely complete the buyback during 2016.

Even cheaper than Delta
Delta Air Lines is poised to deliver another year of strong earnings growth in 2016, driven by its revenue stabilization and a sharp drop in its fuel bill. Delta stock hasn't really reacted to this likely earnings growth, and currently trades for a little more than seven times forward earnings.

Shares of Delta are extremely cheap, but United stock is even cheaper.

United Continental shares are even cheaper, trading for less than six times forward earnings. This reflects an overly pessimistic outlook. The company is in the midst of numerous projects to reduce unit costs, improve reliability, and provide better service. These efforts should allow it to gradually narrow its margin deficit to Delta's after 2016.

Additionally, United has a natural hedge against higher oil prices as the airline of choice for most energy compannies. When oil prices bounce back, United is likely to see a corresponding rise in traffic and fares at its Houston hub, offsetting some of its cost increases.

Finally, by the end of 2016, investors should have some clarity on the management team. By then, Munoz will be either back to work or replaced: The board won't keep him on medical leave forever. As United Continental starts to resolve the issues that have dragged down its share price, investors' confidence should improve, driving a healthy bounce in the stock.

Adam Levine-Weinberg owns shares of United Continental Holdings, and is long January 2017 $40 calls on Delta Air Lines, The Motley Fool has no position in any of the stocks mentioned. Try any of our Foolish newsletter services free for 30 days. We Fools may not all hold the same opinions, but we all believe that considering a diverse range of insights makes us better investors. The Motley Fool has a disclosure policy.