If a bankruptcy wave hits the energy sector, it could sweep up Chesapeake Energy.

According to research firm Wolfe Research, as many as one-third of U.S. oil and gas producers could end up in bankruptcy by the middle of next year. If that were to happen, it's quite possible that Chesapeake Energy (CHKA.Q) could be pulled down with its peers given the massive amount of debt on its balance sheet. Such a scenario would wipe out stockholders, leaving them nothing but the bitter thoughts of what could have been.

The binary outcome
At the moment, Chesapeake Energy's entire fate rests on a rebound in oil and gas prices. A rapid rise in crude above the $50-a-barrel level at which it was trading last fall could fuel a fierce rally in Chesapeake Energy's stock, with the very real potential that it could double: 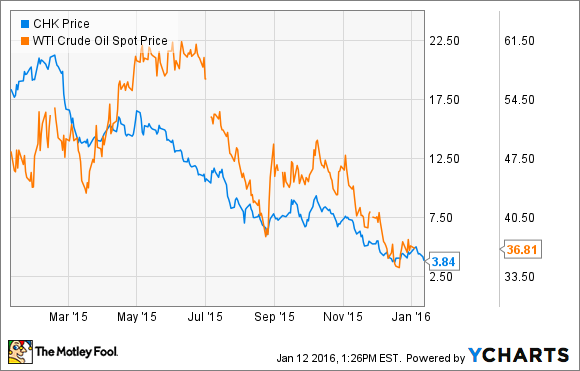 That being said, if crude continues to fall and heads into the low $20s as some analysts fear and stays there awhile, it could be game over for Chesapeake Energy. That's because it has been burning through cash and could run out of it if it doesn't quickly stop the bleeding. In fact, over just the first nine months of 2015, it spent $2.5 billion of cash, which it used primarily to drill more wells: 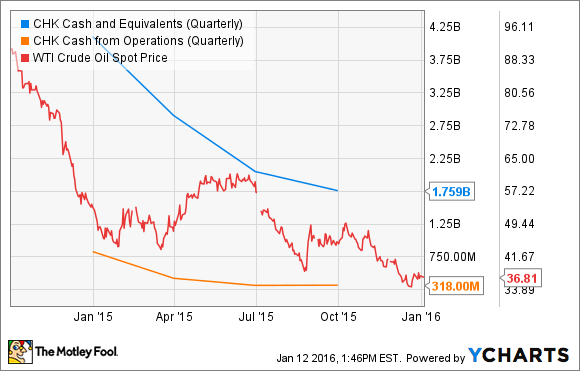 Chesapeake Energy had hoped that those wells would improve its cash flow, but they actually worked against the company because the additional production was added to the glut of oil and gas on the market, further weighing down commodity prices. In a sense, Chesapeake Energy paid money it couldn't afford to spend to pull oil and gas out of the ground oil in order to just have it stored elsewhere. It would have made much more sense to leave the oil and gas in the ground until it was needed. Because it didn't the company's cash pile and cash flow are dwindling, leaving it at risk of running out of money if oil and gas prices remain weak.

The first domino to fall
Since the downturn began in late 2014, nearly three dozen energy companies have declared bankruptcy. However, many of these have been smaller producers, as evidenced by the fact that the total debt outstanding for the entire group is just over $13 billion, which for perspective is about $1.5 billion more than Chesapeake itself owes. In a sense, these are just ripples in the water, not a wave that could wash over and take Chesapeake Energy with it.

The real test will be when a larger producer files for bankruptcy, which could trigger a number of peers to follow suit. That's something that is happening to the coal sector right now, with the dominoes continuing to fall after the fourth big producer declared bankruptcy this week, resulting in a quarter of coal production now restructuring in bankruptcy.

One of the ways that oil and gas producers have been holding back the floodgates of a bankruptcy wave is through debt exchange offers or repurchase agreements with their bondholders. EXCO Resources (NYSE: XCO), for example, has issued senior secured second lien term loans to repurchase a significant amount of its unsecured debt at a discount. These transactions reduced EXCO Resources total debt by 27% while extending its average debt maturity by nearly a year to 4.8 years. This not only reduced EXCO Resource interest expenses but bought the company valuable time to wait for commodity prices to improve.

Chesapeake Energy tried a similar exchange, but it backfired. Unlike EXCO Resources, which wanted to meaningfully reduce its outstanding debt, Chesapeake Energy's primary goal was to extend its debt maturity by exchanging longer duration second lien notes for some of its near-term maturities. However, it failed miserably in that attempt after a limited number of those debt holders agreed to this exchange. That still leaves the company with a maturity wall to overcome in 2017, at a time when a growing number of its peers could be declaring bankruptcy if commodity prices are still weak. To be sure, it's a worst-case scenario but one that is growing more real with each dollar the oil price drops.

Investor takeaway
Chesapeake Energy desperately needs oil and gas prices to rally in 2016. If prices don't improve to at least $50 a barrel by the end of the year, it's possible that a number of producers could begin declaring bankruptcy. Given what's happening in the coal sector, such a wave could take Chesapeake down with it, leaving investors with nothing to show for all of their trouble.