A difference in strategy is one reason these two similar companies have had such different results on the stock market.

Foot Locker (FL 5.76%) and Finish Line Inc (FINL) are about as similar as any two companies can be. Both are retailers selling athletic footwear and apparel in primarily mall-based settings in the U.S., each with more than 1,000 stores nationwide.

While you might think two such companies would trade in tandem, their performances on the market over the past few years couldn't have been more different.

As the chart below shows, over the last five years Finish Line shares have remained flat while Foot Locker stock more than tripled. 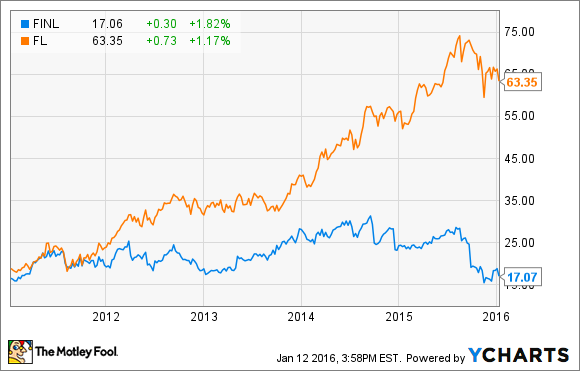 Finish Line took a turn for the worse recently as the company said it would replace its CEO and close 150 stores. Its third-quarter report was particularly ugly as comparable sales fell 5.8%, while overall sales were down 3.5% due to inventory and supply chain problems. On the bottom line, the company reported a whopping loss of $0.49 against an expected deficit of just $0.03, stunning Wall Street and causing shares to fall by double digits. That was preceded by a plunge in the company's stock following its second quarter as the market reacted to slower sales growth.

On the other hand, Foot Locker's comparable sales jumped 8.7% in its most recent quarter, and EPS improved by 20%.

What does Foot Locker have that Finish Line doesn't? Let's take a look at a few of the differences.

Smart management
Much of Foot Locker's recent success owes to former CEO Ken Hicks, who led the company from 2009 until he retired last year. Hicks closed down underperforming stores and focused on synergies between the company's multiple brands, which include FootAction, Champs Sports, and Six:02. The stores have forged partnerships with key brands and added specialty departments including House of Hoops, Puma Labs, and Adidas Collector Shops, adding value and excitement to the shopping experience as well as driving traffic.

Hicks understood the importance of the store experience, refreshing the product constantly, and remodeling stores often, guiding a consistent uptick in traffic.

Choose your partner wisely
Foot Locker has also benefited from its close ties with Nike Inc (NKE -0.07%), the world leader in footwear. The company receives exclusive models from the Swoosh, which drive 60% of Foot Locker's sales. That relationship is reciprocal, too: Foot Locker provides 20% of Nike's revenue.

Like Foot Locker, Nike shares have also been on fire lately as both stocks have benefited from the "athleisure" trend in fashion as sporty clothes have become acceptable casualwear.

Finish Line, on the other hand, has tied its fortunes more closely to Macy's (M 4.85%) than any other partner. In 2012, the two companies reached an agreement that Finish Line would become Macy's exclusive partner to sell athletic shoes, with plans to open 450 Finish Line shops inside of Macy's department stores. Like Finish Line, Macy's is also closing stores, announcing just last week that it would shut down 40 locations. The department-store giant also reported a 3.5% dip in comparable sales in its most recent quarter, and said comps dropped 4.7% over the holiday season. If Macy's is seeing store traffic dwindle, it's likely that those Finish Line stores are too.

Looking ahead, Macy's continued sluggishness should present more headwinds for Finish Line, but shuttering underperforming stores and changing leadership seems like the right move. Still, the loss of those stores will put greater pressure to deliver sales growth on its Macy's outlets, which will be difficult as long as traffic is falling.

As Foot Locker's performance has shown, the macroeconomic trends -- like athleisure and growing sneaker sales -- should be benefiting Finish Line. That said, if Finish Line keeps suffering from self-inflicted wounds Foot Locker will only grow stronger.