After a slow start, the Internet of Things pure-play should ultimately achieve solid growth this year. 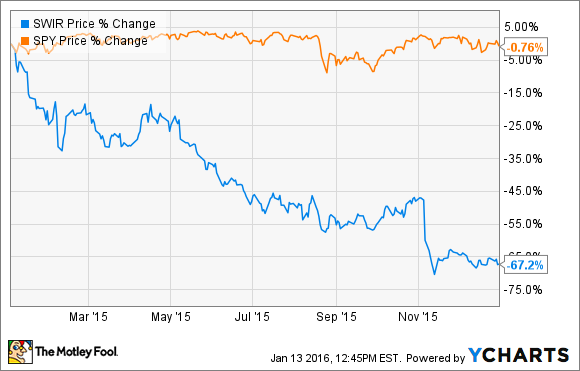 Worse yet, with Sierra Wireless stock down another 13.6% over the past two weeks as of this writing, it's tempting to say 2016 isn't looking particularly promising, either.

But that raises the question: Could 2016 be Sierra Wireless' best year yet? And if so, could now be the perfect time for opportunistic investors to buy?

I think so, and here's why.

Under-promise, (mostly) over-deliver
We can't ignore the problems that led to Sierra Wireless' enormous drop. But perspective is in order.

For one, starting its latest fiscal year with a pair of reasonably solid quarterly performances last year, Sierra Wireless repeatedly issued conservative guidance that left investors running for the exits. To be sure, the gravity of any outperformance relative to Wall Street's estimates simply wasn't enough to offset Sierra Wireless management's persistently cautious forward views.

Most recently this past November, however, Sierra Wireless shares plummeted after both its top and bottom lines fell short of guidance for the first time in over a year. Revenue climbed a paltry 7.9% year over year, driven by contributions from acquired businesses and sub-par organic growth of just 4%. To blame, according to Sierra Wireless CEO Jason Cohenour, was weak demand for 4G-enabled enterprise notebooks, which meant their core OEM solutions business grew only 5.1% year over year to $130.7 million.

Meanwhile, Sierra Wireless' smaller enterprise solutions still achieved solid 26.3% year-over-year growth to $23.9 million, accelerating from 7.6% growth the previous quarter. That said, investors should keep a close eye on gross margin in this segment, which fell to 49.7% for the first three quarters of fiscal 2015 from 53.3% the previous fiscal year, thanks to the fact growth was driven primarily by managed connectivity acquisitions made earlier in the year.

A light at the end of the tunnel
But the margin pressure in enterprise solutions isn't entirely surprising; within that, cloud and connectivity Services revenue came in at just $6.2 million. Thankfully, two quarters ago Sierra Wireless implemented significant changes to its enterprise organizational structure and management team to foster long-term growth in this key area. And as this higher-margin source of revenue increases its contribution to Sierra Wireless' overall business, gross-margin improvement should follow.

In addition, Cohenour pointed out demand in their OEM solutions business was crimped by temporary delays related to an ongoing industry transition to Intel's new Skylake processor platform. Going forward, management expects demand there should return to normal as the transition completes in the coming months.

At the same time, compounding Sierra Wireless' latest post-earnings plunge was another painful forward outlook. But according to management during the subsequent conference call, this guidance came primarily as a single automotive customer shifted the timing of their order cycle to allow time to reduce excess inventory. But again, that wasn't reflective of a lack of demand for Sierra Wireless' products, but rather that this customer took more inventory than required early in the year in anticipation of previous -- and now resolved -- component supply shortages. Once again, this is a temporary problem that should correct itself in the coming quarters.

To be sure, Cohenour admitted disappointment in Sierra Wireless' short-term outlook, but also he summed it up by stating: "As the few key OEM customers work through technology and order cycle transitions, we believe this situation is temporary, that demand will normalize in the coming months, and that our top line will return to solid year-over-year growth rates in 2016."

In the end, for opportunistic investors willing to patiently watch as Sierra Wireless reaccelerates growth this year, I think this might well prove to be Sierra Wireless' best year yet.

Steve Symington has no position in any stocks mentioned. The Motley Fool owns shares of and recommends Sierra Wireless. The Motley Fool recommends Intel. Try any of our Foolish newsletter services free for 30 days. We Fools may not all hold the same opinions, but we all believe that considering a diverse range of insights makes us better investors. The Motley Fool has a disclosure policy.