Despite healthy Q2 earnings results, investors disliked Eastman Chemical's (NYSE:EMN) hedging losses, which were disclosed in the same July 27 report. Its price rebounded, but the damage to investor confidence had been done. Its Oct. 29 report of a 23% year-over-year increase in Q3 earnings put a floor under a stock that didn't look like it would find one, but its subsequent price action hardly suggests enthusiasm for the company. Since 2013, Eastman's stock has been nearly twice as volatile as the S&P 500 index, reflecting hedge fund participation in a stock capitalized at only $9.9 billion. Many of them sold their positions after Q2: 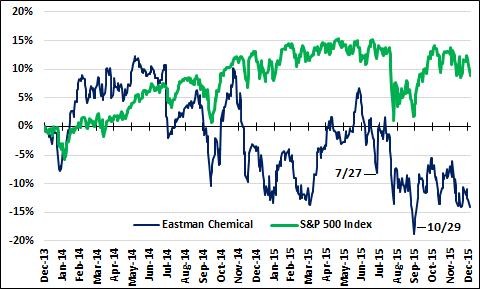 All of this has pushed Eastman's price down to 8.8 times the Yahoo! consensus for 2016 earnings. This is a remarkable valuation for a company that, although cyclical, has a long history of profitability, a sound balance sheet, and that raised its dividend by 15% on Dec. 3, boosting its yield to 2.7%. Although the Yahoo! consensus for 2016 earnings growth is only 5.6%, if the hedge funds are finally out of the way, it seems unlikely that Eastman will remain at such a low valuation indefinitely. Its shares should be less volatile as well.

Eastman is a specialty chemical producer that has grown into a $9.9 billion revenue company (first nine months of 2015 annualized) since it escaped Eastman Kodak's mismanagement in 1994. It's now probably the largest independent specialty chemical producer in the world. There are bigger specialty operations, but they're parts of giants such as BASF or 3M. Eastman has sufficient attractions that it can expect investor attention, but it may soon receive more. Dow Chemical and DuPont intend to merge, and then split in three. One of the new entities will be a specialty chemicals business about half again as large as Eastman. Eastman will provide the obvious comparison for a new company that, at least initially, will be widely held.

They will not be very similar. Specialty chemicals are intermediaries used to make low-volume products, catalysts or additives used in manufacturing high-volume commodities, or finished goods sold into narrow markets. Eastman's products fit all three categories, as will those of Dow DuPont's specialty offshoot. But there is essentially no product overlap between their product lines and little among their end users.

Like most successful specialty chemical companies, Eastman serves numerous end users -- because the market for any one product is limited:

But its product palette isn't a mishmash. It has developed from chemistries in which Eastman has expertise -- in the case of cellulose, going back to the 1920s. Most of Eastman's products result from finding uses for molecules in the course of exploring combinations it has been working with for years. Eastman is the global leader or No. 2 in most of its major products. 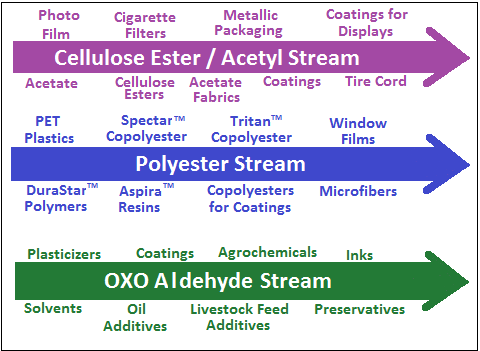 But chemical affinity does not provide a rational structure for a product portfolio. As the graphic suggests, the feedstocks stream branches in many directions: I'm reminded of the Saturday Night Live skit about a dessert topping that's also a floor wax. Eastman structures itself around its products' functionality:

Several divisions sell products from each pathway, and a single customer may be served by several divisions. Clearly, these are profitable businesses. Even Intermediaries, which come as close as Eastman gets to producing commodities, sports a double-digit margin. Fibers' profitability is astonishing to anyone familiar with the textile industry, but much of its revenue derives from tire cord and tow for cigarette filters, applications where Eastman can command premium prices.

In the current environment for industrials, Eastman's nine-month revenue increase is unusual. Like most large chemical companies, it is multinational:

Given Eastman's international exposure, forex had a limited effect on nine-month revenue. This resulted from well-judged currency hedges. Unfortunately, it was offset by the losses on feedstock hedges mentioned above, which are reflected in the "pricing" column below. Steep declines in petrochemical feedstock prices were passed on to customers, also affecting that column, although Eastman captured some margin benefit, too.

Hedge funds' negative reaction to Eastman's propane hedging losses probably had a lot to do with the use to which they were putting its stock, which I suspect was not as a means of investing in the company's fundamentals, but in the company as a consumer (i.e., a net short) of liquefied petroleum gas. It is otherwise difficult to gain short exposure to LPG. Thus, when the Q2 report revealed that Eastman had purchased propane forward, it was apparent that it did not fulfill the role that the funds had chosen it for.

Revenue increased solely because of acquisitions; otherwise it would have declined 12%. Specialty chemicals is a fragmented business, so opportunities are readily available to consolidators such as Eastman. The companies purchased benefit from Eastman's purchasing economies and distribution capabilities: Generally they make solid contributions to earnings immediately upon consolidation. The Yahoo! Finance consensus for 2016 takes no account of the likely contribution of further acquisitions. The figure is almost certainly too low, meaning Eastman Chemical is an even more attractive investment than it suggests.