Silver Wheaton (NYSE:WPM) helps finance miners in return for the right to buy silver and gold at reduced prices in the future. With the mining industry in turmoil, now is a great time to make opportunistic deals. But after a couple of big transactions in 2015, does Silver Wheaton have anything left for 2016?

Not a miner
Silver Wheaton makes money by selling silver and gold, but it's not a miner. That's important. It gives miners cash up front in return for the right to buy future silver and gold production from a mine at advantageous prices. This is called streaming. Silver Wheaton currently buys silver for around $4 an ounce and gold for about $400 an ounce. Silver and gold recently traded hands at over $13 and $1,000 an ounce, respectively. So this is a pretty good business.

But you need to have the upfront cash to get these deals done. And they can get pretty big. For example, at the end of 2015 Silver Wheaton inked a $900 million deal with struggling mining giant Glencore. It was a win/win, with Glencore getting the cash it needed to shore up its balance sheet (and convince investors that it wasn't at risk of going under) and Silver Wheaton is set to receive low-priced silver for years into the future. But I don't carry an extra billion in my back pocket, do you?

That's why Silver Wheaton has a $2 billion line of credit with its banks. This lets it jump on deals and then finance them on a more permanent basis later with stock sales, the basic model it's used for years. The thing is, the company did two big deals last year. The first was a $900 million deal with Vale (NYSE:VALE) in March and the second was the equally impressive Glencore streaming agreement in November. That's $1.8 billion.

Not so much money today
So after spending so much money in 2015, where does the company stand today? At the end of September Silver Wheaton had around $1.4 billion left on its revolving term loan. That was after the Vale deal, but before the Glencore transaction. So pull another $900 million off that number and you get around $500 million.

That's more than pocket change, but certainly not enough to do another giant deal. Which is a problem for Silver Wheaton on the growth side, particularly since miners are so desperate for cash these days. Normally, Silver Wheaton would just issue stock to pay the banks back and free up some room on its revolver, but its own share price has been cut in half over the past year. In fact, Silver Wheaton is looking to buy shares, not issue them, because they are so depressed right now. 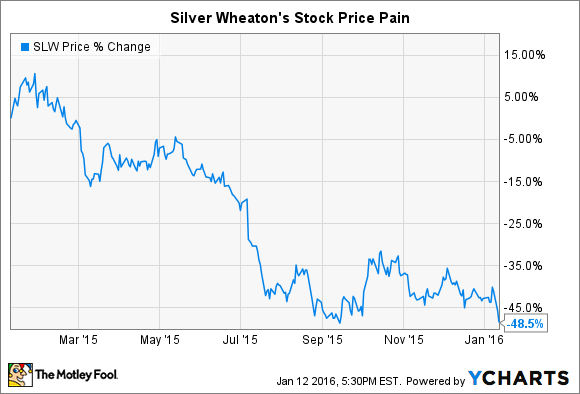 Taking on long-term debt could free up the credit line, but that basically leaves the company's balance sheet unchanged. So that's not a great solution, either. Moreover, Silver Wheaton doesn't have any long term debt on the balance sheet today -- so this doesn't appear likely unless the company changes the way it goes about doing business. I'd actually be concerned if that happened.

Time will solve this
So, as we move into a new year, it looks like Silver Wheaton is short on cash for big deals. That doesn't mean it wouldn't try to make a good deal work by partnering up with peers or that it wouldn't do a smaller one. But at this point it's more likely that Silver Wheaton will be paying down its credit line using cash flow from its existing streaming portfolio than spending money on new streaming deals. But keep an eye on the debt balance, as it comes down over time Silver Wheaton is likely to start looking for some new deals to bolster its growth prospects.