Valero Energy Partners is one of the highest valued midstream MLPs in America. Find out whether it's worth buying at today's prices, or if better alternatives exist.

Since the oil crash began 18 months ago, it seems almost no energy stocks have been spared from the carnage. I say "almost" because some small, fast-growing midstream MLPs, especially have not just held up better than peers, but has also recorded decent gains. One MLP that has been doing exceptionally well is Valero Energy Partners (NYSE: VLP). Let's take a look at why Valero Energy Partners seems to have some special sauce in its stock while others have struggled. 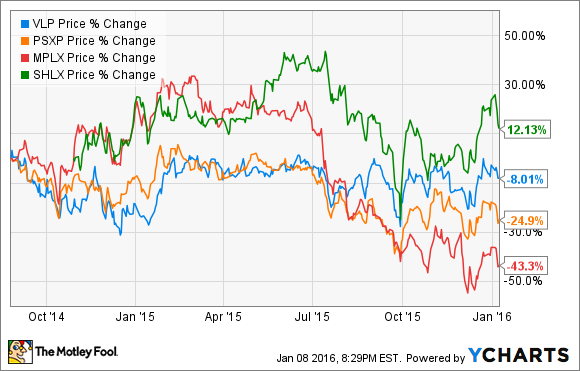 Valuation: high, but in line with peers

Overall, Valero Energy Partners isn't overly expensive relative to its fast-growing peers, indicating that a strong investment case can be made at today's prices. This is especially true when one looks at its payout profile, one of the most important things income investors need to consider when contemplating buying a midstream MLP.

Distribution profile: one of the industry's best
There are three components to any dividend investment: yield, payout sustainability, and long-term growth potential.

Not only does the distribution have plenty of room to grow, but that excess DCF the MLP is generating -- $71.3 million on an annualized basis -- combined with the Valero Energy Partners' long-term, fixed-fee contracts with its sponsor and general partner, Valero Energy Corp. (NYSE: VLO), also means the distribution is much less likely to be cut even if energy prices stay low for years. That's especially true given that 85% of revenues are insured by minimum volume commitments with Valero Energy Corp.

Long-term growth potential: great, but not as good as its competitors

Fortunately for Valero Energy Partners, its balance sheet is one of the least leveraged in its industry, giving it some room to add some debt. Also with its share prices remaining high, it can raise cash from equity at much more attractive rates than its peers.

But Valero Energy Partners' long-term future dropdown potential is smaller than those of its peers. For example, MPLX, in addition to dropdowns from its sponsor, Marathon Petroleum Corp., now has the benefit of MarkWest's dominant position in the Utica and Marcellus gas shale formations, which provides billions in additional investment opportunities.

Meanwhile, Shell Midstream Partners has all of the global midstream assets of Royal Dutch Shell -- the world's third largest publicly traded oil company -- that it could potentially acquire, which could fuel decades of strong distribution growth.

Bottom line
Valero Energy Partners has a lot going for it. Its payout is rock solid, it's throwing off tons of excess cash, and thanks to its rampant growth and squeaky clean balance sheet, it has plenty of access to both cheap debt and equity growth capital.

Over the next five years, I believe that this MLP will reward dividend growth investors with impressive income and capital gains, even if bought at today's prices. However, I its ultimate long-term asset growth potential is smaller than those of fellow refiner/integrated oil & gas sponsored MLPs.

Adam Galas owns units in Shell Midstream Partners, MPLX, and Phillips 66 Partners. The Motley Fool has no position in any of the stocks mentioned. Try any of our Foolish newsletter services free for 30 days. We Fools may not all hold the same opinions, but we all believe that considering a diverse range of insights makes us better investors. The Motley Fool has a disclosure policy.