Freeport-McMoRan, Chemours, Teck Resources, Vale, and ArcelorMittal all enjoy an up day for once.

What: With the market rallying today, a weight has been lifted off of materials stocks. That fueled strong rallies in Freeport-McMoRan (FCX -0.90%), Chemours (CC -3.06%), Teck Resources (TECK -0.69%), Vale (VALE -1.76%), and ArcelorMittal (MT -1.26%), each of which was up double digits by the mid-afternoon. Today's rally is of small comfort given how steeply these stocks have fallen since the start of the year. 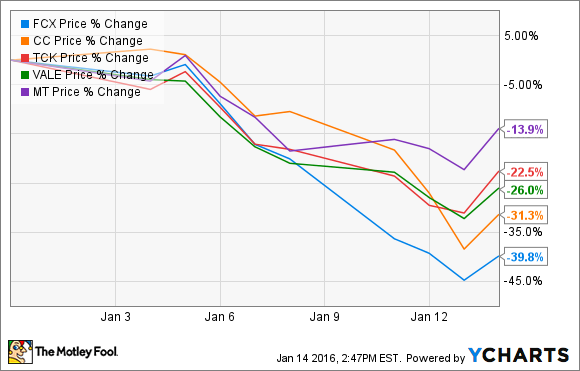 So what: Freeport-McMoRan's move was fueled not only by today's market action, but by the rise in the oil price. Brent crude closed up more than 2.5%, to just more than $31 a barrel. While that's a step in the right direction, crude is still $14 per barrel below the company's 2016 plan; it has a lot more to recover before it can fully support Freeport-McMoRan's current operations.

Meanwhile, Teck Resources, Vale, and ArcelorMittal are rising today despite the fact that Citi cut its iron-ore price forecast due to an overabundance of supply, and weak demand. The bank also cut its 2016 iron-ore price estimate from $41 per ton to $36 per ton, and also reduced its estimates for the next two years.

This forecast has the biggest impact on Vale because it's the largest producer of iron ore. However, the forecast is also bad news for steelmaking coal-producer Teck Resources and steelmaker ArcelorMittal because it implies that demand for steel will be weaker than expected. All three shrugged off the report, instead joining the market rally.

Finally, Chemours' move today was largely market driven. The only news hitting the wires relating to the company was a press release announcing its next earnings release. That release, which is expected before markets open on Feb. 24, will provide investors with a real sense of the impact Chemours is feeling from a slowdown in the Chinese economy, which is what has been weighing on its stock this year.

Now what: After a brutal start to the year, material stocks are breathing a sigh of relief today. This relief might not last because these companies really need to visibly see higher demand for the products they sell in order to see a real sustained improvement in their stock prices.

Matt DiLallo has no position in any stocks mentioned. The Motley Fool owns shares of Companhia Vale Ads and Freeport-McMoRan Copper & Gold,. Try any of our Foolish newsletter services free for 30 days. We Fools may not all hold the same opinions, but we all believe that considering a diverse range of insights makes us better investors. The Motley Fool has a disclosure policy.