Please ensure Javascript is enabled for purposes of website accessibility
Log In Help Join The Motley Fool
Free Article Join Over 1 Million Premium Members And Get More In-Depth Stock Guidance and Research
By George Budwell - Jan 14, 2016 at 8:47AM

Galapagos NV's shares rose by nearly 25% last year due to the steady progress of its lead experimental candidate filgotinib. 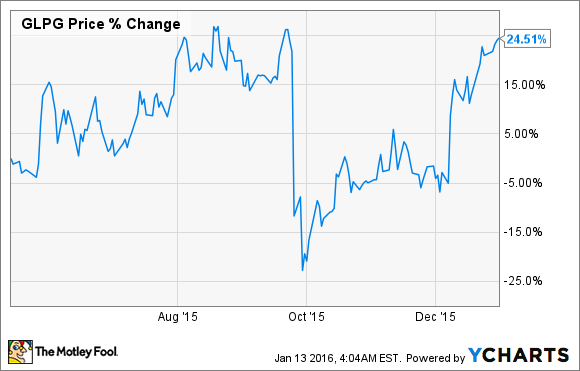 What: Over the course of 2015, the Belgian biotech Galapagos NV (GLPG -0.98%) reported that its lead experimental candidate, filgotinib, was making major strides in its clinical development as an oral treatment for both rheumatoid arthritis and Crohn's disease. Based on these promising results, Galapagos decided to perform an IPO on the Nasdaq to raise money, and investors were apparently more than happy to gobble up the biotech's shares. According to data provided by S&P Capital IQ, Galapagos' share price appreciated by more than 24% from the time of its IPO until the end of 2015.

So what: Galapagos is currently in the process of advancing filgotinib into a late-stage trial for rheumatoid arthritis, and it looks like the drug could also enter a pivotal-stage study for Crohn's disease before the end of 2016. .

Put simply, filgotinib is targeting some of the very same territory occupied by AbbVie's (ABBV -0.46%) Humira, one of the best-selling drugs in the world over the last couple of years. That's why AbbVie was previously interested in co-developing  filgotinib with Galapagos -- until AbbVie decided to go with its own orally-administered experimental candidate, ABT-494, last September.

After AbbVie exited its partnership with Galapagos last year, Gilead Sciences (GILD 0.37%) decided to enter the picture by inking a roughly $2 billion agreement with Galapagos to develop filgotinib across a wide diversity of inflammatory conditions.

Now what: While Gilead is undoubtedly a force to be reckoned with when it comes to picking top-flight experimental-stage drugs, investors should bear in mind that inflammatory diseases in general are a hotbed of research activity in the pharma industry right now due to their enormous market sizes. Taken together, the rheumatoid arthritis and Crohn's disease drug markets already sport a $20 billion valuation, as just one example.

Strong clinical results for any experimental-stage inflammatory drug therefore may not be enough to achieve commercial success for what is quickly becoming a rather crowded market. That's why I'm willing to hold off on buying this mid-cap biotech for the moment.

George Budwell has no position in any stocks mentioned. The Motley Fool owns shares of and recommends Gilead Sciences. Try any of our Foolish newsletter services free for 30 days. We Fools may not all hold the same opinions, but we all believe that considering a diverse range of insights makes us better investors. The Motley Fool has a disclosure policy.