Clinical progress on its late-stage pipeline has investors feeling bullish.

What: Shares of Neurocrine Biosciences (NBIX 0.71%), a biopharmaceutical company focused on treatments for neurological and endocrine-related diseases, more than doubled in value during 2015, according to data from S&P Capital IQ. 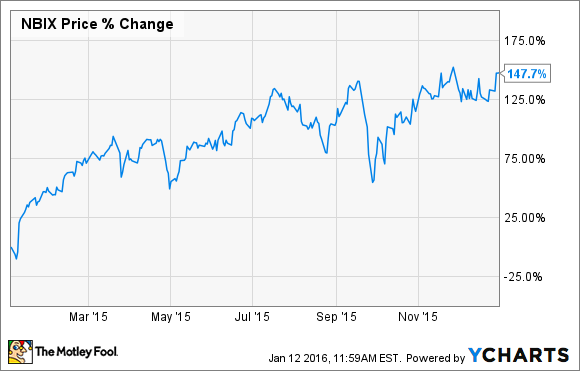 So what: The year was filled with positive developments that gave investors reason to cheer, including:

Now what: Given the stream of good news, it's easy to see why the market was bidding up shares of Neurocrine Biosciences all year. Neurocrine Biosciences also appears to be on sound financial footing and has previously estimated that it would end 2015 with more than $450 million in cash in its bank account. Even with an expected uptick in spending as it advances its pipeline, the company should have plenty of capital to keep things running for at least several years.

With a huge cash hoard, two different compounds in late-stage clinical trials, and a strong partnership in place with pharma giant AbbVie, I see plenty of reasons to remain bullish on Neurocrine Biosciences' stock.