After not increasing its distribution for five years, Energy Transfer Partners (NYSE: ETP) was able to finally resume distribution growth more than two years ago. In fact, over the past nine quarters the company has incrementally increased its distribution each quarter: 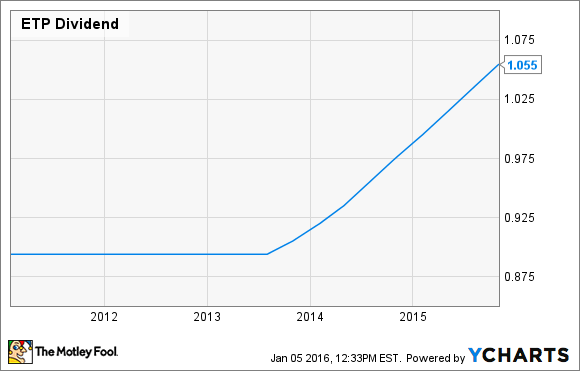 That said, recently the company's distribution coverage ratio has weakened to the point where it is paying out more than it is earning. Last quarter, for example, Energy Transfer Partners' distribution coverage ratio slipped to just 0.84 times, which pulled the ratio down to 0.97 times over the past nine months. This is an unsustainable level, which suggests that the distribution could actually be reduced in 2016. That said, Energy Transfer Partners would beg to differ, with the company offering a compelling case that it will be able to continue growing its distribution in 2016.

One of the reasons why Energy Transfer Partners' distributable cash flow has fallen is due to weakness in the company's midstream segment. Last quarter the total gross margin from that segment fell from the $539 million it earned in the year-ago quarter to $467 million in this past third-quarter. That was largely due to a $120 million year-over-year drop in gross margin from non fee-based contracts and processing resulting from lower commodity prices. To put that drop into perspective, the company's total distributable cash flow totaled $740 million last quarter, which was down $130 million year over year, so in a sense that drop can largely be blamed by the weakness in the company's midstream business.

Should commodity prices continue to weaken it would put even more pressure on this segment, which likewise will pressure the company's cash flow. That's one of the key pressures being put on the company's unit price, which has been plunging. This caused its distribution yield to soar above 15%, which is a sign by the market that it believes a distribution cut is on the horizon. 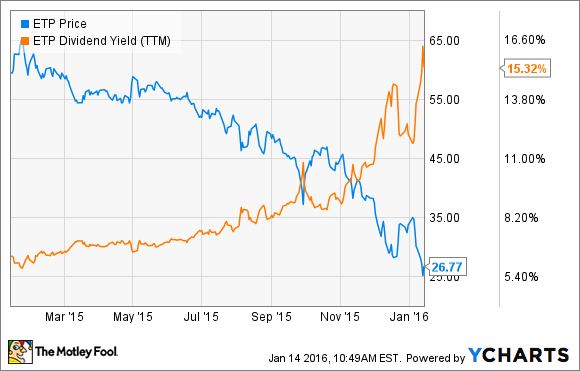 With a number of midstream companies having announced distribution cuts or suspensions this year, it wouldn't be unreasonable to think that Energy Transfer Partners will join them.

The distribution bull case
Having said all that, there are two key differences between Energy Transfer Partners and MLPs reducing their payouts. First, its debt-to-EBITDA ratio of 4.49 times isn't as worrisome as the ratios of some of its peers. In fact, it was the higher leverage of its peers which has limited their ability to use debt to fund growth projects.

In addition to that, the other funding concern across the MLP space has been the need to issue equity capital to fund projects in the backlog. With midstream equity valuations plunging, many of these companies can no longer issue equity without it being highly dilutive.

This isn't a problem at Energy Transfer Partners because it sold a number of assets in 2015 in drop down transactions with affiliate Sunoco (NYSE:SUN). These transactions brought in a substantial amount of cash that reduced its remaining equity requirement in 2016 to a modest amount. Further, it picked up a big equity stake in Sunoco that it can sell down instead of issuing its own equity. This cash will enable the company to fund its robust near-term project pipeline, which is expected to bring a number of key projects online in 2016.

Because it was able to largely pre-fund its 2016 capital program with the Sunoco transactions, and doesn't have the debt concerns of its peers, Energy Transfer Partners fully anticipates to be able to maintain its current distribution growth profile of about 8% per year. Further, it expects that it will be able to do so while maintaining a long-term coverage ratio of approximately 1.05 times over the long-term.

Investor takeaway
Despite some near-term weakness in its coverage ratio, Energy Transfer Partners doesn't believe that its distribution needs to be reduced. Instead, it sees that payout heading higher because it has already largely pre-funded its 2016 capital needs, it has a lower leverage ratio than many of its peers, and has a number of cash flowing projects coming online this year. So, unless the market grows progressively worse, Energy Transfer Partners payout should head higher in 2016.