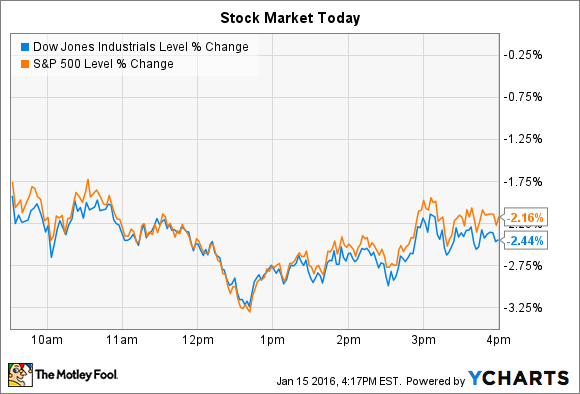 The decline left the S&P 500 at 10% lower on the year, while the Dow is down 8%. Meanwhile, several individual stocks stood out today, including Intel (INTC -1.12%), which posted its fourth-quarter earnings results, and Chipotle Mexican Grill (CMG -0.33%), which announced plans to temporarily close its stores nationwide next month.

Intel's growth outlook
Intel was the Dow's worst performer, slipping 9% in the wake of its fourth-quarter earnings report. The chip giant managed solid results, with revenue inching up by 1% to $14.9 billion. Intel's Data Center segment performed particularly well, rising 5% in Q4 and 11% for the full year. Profit margin for Q4 was 64.3%, well above management's 62% guidance thanks to improved production costs.

Overall, executives were pleased with the latest figures. "Our results...marked a strong finish for the year and were consistent with expectations," CEO Brian Krzanich said in a press release.

However, Intel's forecast for 2016 appeared to disappoint investors. The company guided to $13.6 billion of revenue for the full year, which equates to growth of about 6%, excluding the expected gain from its Altera acquisition. Wall Street analysts had been looking for heftier sales growth to $13.9 billion .

At the same time, gross profitability should decline to 62% in the first quarter before recovering to end the year at an average of 63% of sales. Despite the weak outlook for global growth, Intel plans to boost research and development spending by an aggressive 8%, which executives believe will put it in position to capitalize on several long-term market opportunities. "This year, we'll continue to drive growth by powering the infrastructure for an increasingly smart and connected world," Krzanich said.

Chipotle's day off
With its 5% gain, Chipotle was one of just a handful stocks in the S&P 500 to end the day in the green. In fact, shares have strung together a bit of a rally over the last few days. While far from the high it set last August, the stock is up 16% since Tuesday, when executives announced details on how they plan to recover from the food safety scares that have halted the chain's sales growth and threatened to harm its "Food with Integrity" image.

Investors learned today that part of that strategic response will include closing all of its 1,900 locations for the lunch rush on Feb 8. Chipotle has scheduled what it calls a national employee meeting on that Monday to discuss food safety changes with its employees and to outline additional steps it plans to take to try to ensure that dangerous bacteria never again make it into the food prep line.

We're having a national employee meeting on 2/8 to discuss recent and future food safety changes. All US locations will be closed until 3pm.

As it serves roughly 1 million customers per day, the restaurant chain will take a big hit from closing for business even for just a few hours. But the message it reinforces for investors is that Chipotle is serious about reshaping its food safety posture, which should ultimately help it win back the many taco and burrito fans it has lost over the last few months.