Please ensure Javascript is enabled for purposes of website accessibility
Log In Help Join The Motley Fool
Free Article Join Over 1 Million Premium Members And Get More In-Depth Stock Guidance and Research
By Demitri Kalogeropoulos - Jan 15, 2016 at 11:46AM

Sales growth slowed, but then it picked back up in the second half of the year.

What: Discount retailer Five Below's (FIVE -1.31%) stock sank 21% lower in 2015, according to S&P Capital IQ data. Shares spent almost the entire year in negative territory, touching a 30% loss in November before recovering slightly over the final few weeks of 2015. By comparison, the broader market lost less than 1% last year: 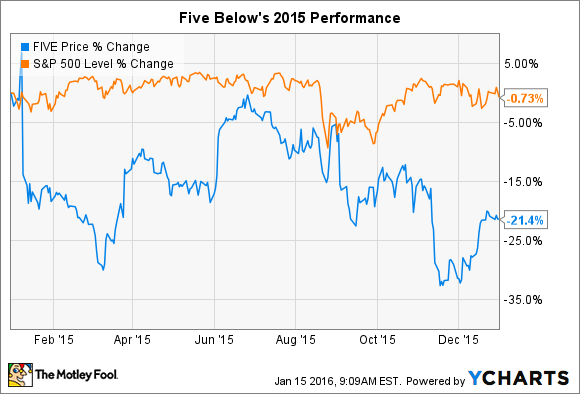 So what: The stock underperformed as Five Below navigated weak consumer-spending trends through the first half of the year. In early January, management lowered its fourth-quarter comparable-store sales guidance thanks to "softness in the business" around the holiday shopping season. Then, in March, the retailer projected a further slowing of comps, down to as low as 1% for Five Below's fiscal first quarter.

Yet the business started to show strong improvements in the second and third quarters. In Q2, comps growth accelerated to 3%. And in Q3, that figure jumped to an industry-beating 4.8%. CEO Joel Anderson credited "strength in the performance of our new stores and ... our compelling assortment of trend-right products at a great value." The revenue spike helped Five Below post a 28% rise in operating income.

Now what: The positive operating momentum has carried on into the fourth quarter, as Five Below last week announced that comps rose by 4.1% over the holidays. "We are very pleased with our strong performance across both new and existing stores during the all-important holiday season which illustrates the broad appeal and value proposition of Five Below," Anderson said in a press release.

But the whiplash investors endured last year was a reminder of just how sensitive this retailer's business is to shifting economic and fashion trends. If management gets the merchandising, marketing, and pricing right, then the result is often huge profit spikes like we've seen over the past six months. But poor execution on any of these points will ensure weak operating results.

The stock's valuation of 38 times trailing earnings is a big discount from the over 50 times earnings multiple that Wall Street assigned Five Below as recently as 2014. But investors still might see this as an expensive stock, given that the company isn't (yet) consistently posting industry-beating comps figures.

Demitrios Kalogeropoulos has no position in any stocks mentioned. The Motley Fool recommends Five Below. Try any of our Foolish newsletter services free for 30 days. We Fools may not all hold the same opinions, but we all believe that considering a diverse range of insights makes us better investors. The Motley Fool has a disclosure policy.