The leading online travel agent continued to improve in 2015.

What: Shares of online travel merchant Priceline Group (BKNG 2.77%) were moving higher last year, improving 12%, according to data from S&P Capital IQ. The leader in travel bookings posted steady growth on the top and bottom lines to deliver a solid year and continued to make acquisitions to grow the company. 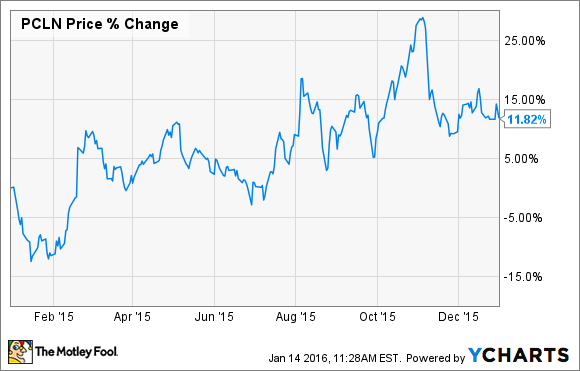 So what: It was another big year for consolidation in the industry as rival Expedia (EXPE 3.07%) swallowed up Orbitz and Travelocity. Priceline, meanwhile, expanded its entry into the restaurant reservation industry. After purchasing OpenTable in 2014, it bought an Australian reservations service, AS Digital, last year. Other acquisitions last year included RocketMiles, a travel-loyalty start-up, and a minority stake in a Brazilian online travel agency. Compared to previous years, when Priceline pulled companies like Kayak and OpenTable into its fold, 2015 was relatively quiet for acquisitions.

Priceline's first big move of the year came in February when the stock jumped 9% as sales rose 19% and it beat estimates on top and bottom lines in its fourth-quarter earnings report. Investors also cheered a $3 billion authorization for share buybacks.

The stock surged again following its second-quarter report as the company scooted past earnings estimates despite experiencing currency headwinds.

In October, Priceline said it would partner with TripAdvisor (TRIP 4.95%) to put its listings on TripAdvisor's Instant Booking service, sending TripAdvisor shares soaring and scoring a win over rival Expedia. After reaching an all-time high shortly after that news, shares dipped on a weak third-quarter earnings report and closed out the year in the $1,200-$1,300 range.

Now what: Like other growth stocks, Priceline has gotten hammered to start the new year. The stock is down 13% as the oil crash and China concerns have rattled investors. However, Priceline's fundamentals remain solid. While a slowdown in China's economy could hurt its China-focused booking properties like Agoda.com, low oil prices should be a boon for the travel industry, making flying and driving cheaper. Analysts are expecting EPS growth near 20% this year and there seems to be little reason to expect Priceline to disappoint.

Jeremy Bowman has no position in any stocks mentioned. The Motley Fool owns shares of and recommends Priceline Group and TripAdvisor. Try any of our Foolish newsletter services free for 30 days. We Fools may not all hold the same opinions, but we all believe that considering a diverse range of insights makes us better investors. The Motley Fool has a disclosure policy.