What: Shares of Ctrip.com International Ltd. (TCOM 0.75%) were soaring through the roof last year, gaining 104%, according to data from S&P Capital IQ. The Chinese online travel agent rode a strong growth trend and delivered its own earnings beats to more than double over the year. 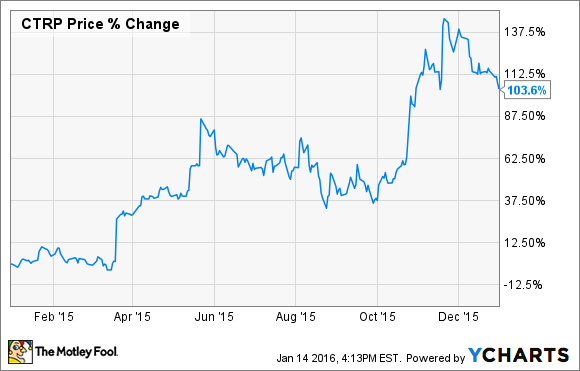 So what: The travel booking service first popped on March 20, gaining 25% as the company blew past revenue estimates and wowed on first-quarter guidance. Revenue increased 30% in the fourth quarter, but the company projected sales increases of 40%-50% in the coming period. Ctrip posted a loss in the quarter, but it was narrower than expected.

Ctrip gained again after its first-quarter earnings report, and then surged after buying a portion of Expedia's $671 million stake in eLong. By taking a stake in the rival travel service in what's considered the world's fastest-growing economy, Ctrip consolidated its own power over the market.

Just a few days later, the company got more good news as priceline.com, the global leader in online travel, announced it would increase its stake in Ctrip by $250 million. The move acts a vote of confidence from Priceline and a sign of the potential market growth in China. Ctrip shares stumbled in early June after its attempt to buy rival Qunar was rebuffed. Terms of the proposal were not disclosed. The stock swooned over June and July as it sold $1.1 billion in debt, but bounced back on its second-quarter earnings report.

The stock jumped 10% in one day as it beat earnings, raised guidance, and said it had received an offer for its eLong stake.

Ctrip shares popped more than 20% in one October session when it announced a share swap worth $3.4 billion with rival Qunar Cayman Islands Ltd., taking 45% in the overseas travel specialist in China.

Finally, shares soared on its third-quarter earnings report in a quarter that included 49% revenue growth.

Now what: Ctrip seems to be following a familiar consolidation strategy out of the playbooks of Priceline.com and Expedia. The strategy has worked for those two companies, and investors clearly seem to think it will deliver in China as well. To start 2016, Ctrip made a similar investment in MakeMyTrip, indicating it plans to continue the strategy. Profits are starting to mount, and strong revenue growth is expected to continue. The Chinese travel market should continue to pay rewards for Ctrip.

Jeremy Bowman has no position in any stocks mentioned. The Motley Fool owns shares of and recommends Priceline Group. The Motley Fool recommends Ctrip.com International. Try any of our Foolish newsletter services free for 30 days. We Fools may not all hold the same opinions, but we all believe that considering a diverse range of insights makes us better investors. The Motley Fool has a disclosure policy.

Why Trip.com Stock Is Soaring Today