Please ensure Javascript is enabled for purposes of website accessibility
Log In Help Join The Motley Fool
Free Article Join Over 1 Million Premium Members And Get More In-Depth Stock Guidance and Research
By Matthew DiLallo - Jan 15, 2016 at 10:03AM

Only if oil prices rebound sharply.

With a dividend yield just over 1%, EOG Resources (EOG 0.69%) certainly doesn't catch the attention of income seekers. That being said, it does have a very strong history of increasing its dividend, with the company boosting the payout 16 times over the past 16 years: 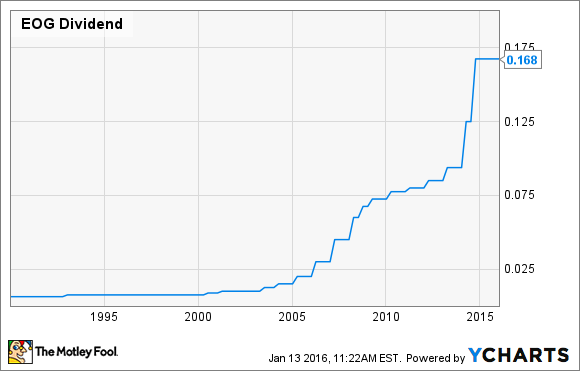 However, two of those increases came in 2014 and none came last year. That pause could continue throughout 2016 if oil prices remain weak. On the other hand, once oil hits a certain point, it's quite possible that EOG Resources resumes growing both its production and its dividend.

The bear case for a dividend increase
With the price of crude currently in the low $30s, it's having two very big impacts on EOG Resources. First, its cash flow from legacy wells is falling. That puts the company in a tight spot because, through the first nine months of 2015, EOG Resources generated roughly $3.2 billion in discretionary cash flow after capturing an average of nearly $50 per barrel of oil. However, it invested almost $4 billion in capex while paying $275 million in dividends, resulting in a shortfall that it funded with cash on hand and new debt. Given that oil is now almost $20 per barrel lower, its cash flow could fall by a substantial amount, leaving it to continue relying on its balance sheet to fund a growing shortfall.

The other issue the company is running into is the fact that the lower oil price is squeezing its drilling returns. As the slide below notes, some of the company's drilling inventory was barely economic at a $50 oil price: 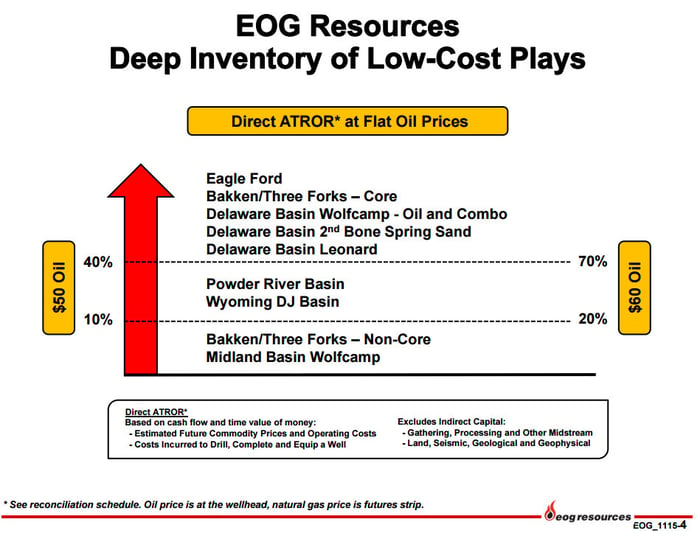 With oil now in the low $30s, it not only eliminates this weaker drilling inventory entirely but is squeezing the return potential of the company's higher returning inventory. It's also worth pointing out that a $10-per-barrel difference in oil prices can make a major difference on the return.

Given the current oil price weakness, it's very unlikely that EOG Resources will increase its payout in 2016. In fact, the company could decide that suspending its dividend is the best course of action, with roughly $366 million in annual dividend outlays potentially better spent on acreage acquisitions or to maintain a strong balance sheet. That's the course of action that a number of producers have taken over the past year with Chesapeake Energy (CHKA.Q) among the many shale producers to realize that paying a dividend was just a waste of cash. Not only was Chesapeake Energy's dividend very meager, but with the company chronically outspending its cash flow it clearly had better uses for cash than returning it to investors.

The bull case for a dividend increase
On the other hand, if the price of oil rebounds sharply in 2016, it could provide EOG Resources with a gusher of cash flow, which could be used to both resume production growth and increase its dividend. The company said last year that its plan was to wait until the price of oil stabilized above $65 per barrel before resuming production growth. That said, it made that statement when oil was near $60 a barrel. With its price continuing to fall, it has taken service costs down with it. That suggests that EOG Resource could deliver the same economic growth at an even lower oil price in 2016.

Furthermore, unlike Chesapeake Energy, which pursued production growth in 2015 despite an oversupplied market, EOG Resources showed a lot of restraint. It did so by drilling but not completing several hundred wells aiming only to complete enough wells to keep its production roughly flat. This inventory of uncompleted wells could quickly be brought on line in 2016 amid an oil price recovery, which would then provide an immediate boost to its cash flow. That one-two punch of rising cash flow from legacy wells plus a burst of cash flow from new wells could provide the company with the incentive to return more cash to its shareholders.

Investor takeaway
Given where the price of oil is right now, a dividend increase appears unlikely. However, if oil rebounds sharply in 2016, it could be the catalyst that fuels a higher payout from EOG Resources.

Matt DiLallo has no position in any stocks mentioned. The Motley Fool owns shares of EOG Resources. Try any of our Foolish newsletter services free for 30 days. We Fools may not all hold the same opinions, but we all believe that considering a diverse range of insights makes us better investors. The Motley Fool has a disclosure policy.