Just because GE has been around forever doesn't mean it has the best yield out there.

General Electric (GE 1.30%) is one of those perennial favorites among income investors, thanks to its long corporate history and pattern of regular and sustainable increases. But there are plenty of other stocks out there that can top GE's 3.2% dividend yield. Here are a few.

Dan Caplinger: Tobacco giant Philip Morris International (PM -0.23%) is a big favorite among dividend investors, with a current yield of 4.7% that puts General Electric's dividend to shame. The impressive thing about Philip Morris is that it has managed to produce consistent dividend growth even as it faces huge struggles from the U.S. dollar.

As an example, in just the third quarter alone, Philip Morris took a $0.37-per-share hit in its earnings due to falling foreign currency values. That represented a reduction of nearly one-quarter from what its earnings would have been in constant-currency terms, and the strong dollar cost Philip Morris about 18 percentage points of revenue growth. As a result of its weaker bottom-line performance, Philip Morris has suspended stock repurchases, but it didn't stop the company from giving shareholders a 2% rise in their dividend payouts.

That growth rate is slow by historical standards, and the company has told investors that it expects to return more capital to shareholders as soon as currency headwinds let up. Growing dividends give Philip Morris an edge over many dividend stocks, and investors can expect that edge to last well into the future.

Matt DiLallo: With a dividend yield nearing 7%, U.S. oil giant ConocoPhillips (COP 2.38%) smokes GE's dividend. That said, there's good reason why ConocoPhillips' yield is so high: Investors are worried that it might not last the oil downturn. That's clear by looking at the following chart, which shows that the company's stock price has fallen along with the oil price, pushing up its yield: 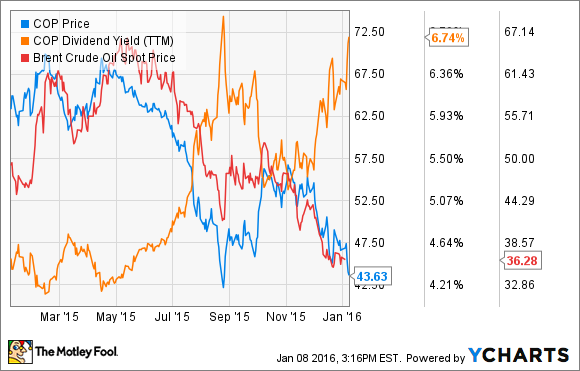 On the one hand, there is some reason to be concerned. Currently, ConocoPhillips' combined dividend payment and capex outlays are higher than its cash flow. That said, it's a situation the company believes will be corrected by 2017 irrespective of the price of oil. That's largely because the company is putting the finishing touches on some major projects, which, once online, will not only reduce its capex requirements, but will produce cash flow.

In further support of the dividend, ConocoPhillips has one of the strongest credit ratings and balance sheets in the sector, which gives it the flexibility to add debt to bridge the gap between capex and cash flow. Furthermore, it has a huge portfolio of non-core assets that it is working to divest in order to keep its debt in check. Finally, and most important, the company has said on more than one occasion that its dividend is its top priority. It's a payout that it plans to protect because it sees it as a vital part of its value proposition to shareholders.

Not many companies make paying a growing dividend the top priority, but that's just what ConocoPhillips has done. Because of that, investors seeking a bigger yield than GE can rest easy that the only direction ConocoPhillips' dividend is going is up.

Todd Campbell: Acquisitions, a pipeline that's starting to pay off, and cost-cutting makes Pfizer (PFE 3.77%) one of my favorite dividend stocks to buy -- especially since it pays a 3.7% dividend yield that's one of the best around.

Pfizer announced two transformative acquisitions in 2015 that position it for sales and profit growth over the next five years. First, the company bought the specialty drugmaker Hospira for $17 billion, catapulting Pfizer to the forefront of the emerging market for generic biologics, or biosimilars. Second, it agreed to a $160 billion merger with the Botox and eye-care giant Allergan (AGN), expanding its product line and potentially saving it billions of dollars a year in taxes.

Those deals are the latest moves in the company's life-after-Lipitor restructuring. Sales of Lipitor, which was hauling in $13 billion annually prior to losing patent protection in 2011, are stabilizing now at roughly $1.6 billion, and that should allow for sales from new drugs and acquisitions to return Pfizer to top-line growth. Among recently launched drugs that are enjoying rapid sales growth are the anticoagulant Eliquis, which has seen its sales more than double in 2015, and the cancer drug Ibrance, which had sales of $230 million in Q3. If Pfizer's deals and new drugs boost its top line, then billions of dollars in post-Lipitor cost-cutting should allow more money to trickle down to dividend-friendly profit -- and that makes it an incredibly intriguing stock to buy.

Tyler Crowe: One part of the market that seems to produce a whole bunch of dividend payers with higher yields than GE is energy. Of all of the companies in this space, though, one that stands out with a high yield that actually looks like it isn't headed in the wrong direction is Enterprise Products Partners (EPD 1.16%). Thanks to so many of its peers making questionable moves with debt and promises to grow dividends at extraordinary rates, the entire pipeline/master limited partnership sector has declined, pushing Enterprise's yield up to an impressive 6.75%.

A yield that high might give some investors pause, since it suggests others are pricing in a payout cut. If you look at the company's most recent results, though, it doesn't appear that is on the horizon anytime soon. Enterprise's management team has been very good at insulating the company's operating profits from the current volatility in oil and gas prices. At the same time, though, it has been using the recent downturn to make some large strategic acquisitions that further ensure growing cash flow in the future.

With 18 years of annual distribution increases, Enterprise is creeping up on Dividend Aristocrat status, and you can imagine that management doesn't want to ruin that streak now. As long as the company continues on its slower but steadier growth plan and doesn't get tempted by the siren song of debt that so many other master limited partnerships followed in recent years, then it should be able to keep that high yield going for many more years to come.

Evan Niu, CFA: Defensive utility stocks are well known for strong cash flow and steady dividend payouts -- in good times and in bad. Verizon Communications (VZ 0.83%) is a great example of such a stock, thanks to its wired and wireless businesses that bring in reliable operating cash flow from customers.

The company remains the largest wireless carrier in the U.S., and has been surprisingly resilient to Uncarrier T-Mobile's (TMUS 1.98%) ongoing strategy of undercutting the larger carriers. Verizon's subscriber base continues to grow, with 110.8 million retail connections at the end of the third quarter.

Despite the capital-intensive nature of operating a national cellular network, Verizon has always had a cohesive technology strategy in terms of which technological horses it bets on. Big Red has carefuly picked the correct technologies to support, which in turn translates into greater capital efficiency. This reduces capital expenditure requirements, preserving free cash flow to pay out in the form of dividends.

On top of that, the 2014 buyout of Vodafone's stake helped Verizon keep more of the profits and cash flow to itself, even if it took on a massive debt burden to finance the deal. Overall, Verizon's current dividend yield of 5% makes short work of GE's payouts.