Please ensure Javascript is enabled for purposes of website accessibility
Log In Help Join The Motley Fool
Free Article Join Over 1 Million Premium Members And Get More In-Depth Stock Guidance and Research
By Reuben Gregg Brewer - Jan 16, 2016 at 9:45AM

The oil industry is ugly today, but ExxonMobil is still the cream of the crop.

ExxonMobil (XOM 3.07%) shares are down over 20% since June 2014. That's around when oil prices started to plummet, so the oil giant's price drop makes sense. The thing is, I don't think the oil industry's supply driven woes are over, which means Exxon could be in for more pain.

Yet I still bought Exxon. Here's why.

A punch to the commodity gut
The first big reason for my purchase of Exxon was the opportunity. ExxonMobil is a commodity business that waxes and wanes with the price of oil. So when oil is priced dearly, Exxon's shares tend to be expensive, making it a bad time to buy the stock. 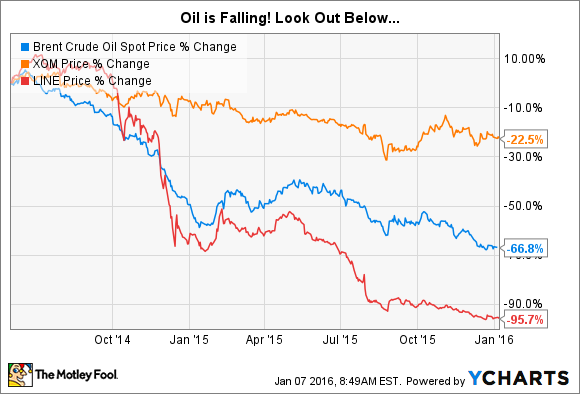 When oil prices fall, however, Exxon's shares are priced relatively cheaply -- a good time to buy. With oil prices over 60% lower since June of 2014, now is a good time to be looking at the oil patch in general if you have a contrarian bent, which I do. But you want to own a survivor, not just any energy company.

Linn Energy (LINEQ) is a great example. This company used equity and debt to build a portfolio of energy assets that was supposed to be capable of supporting a high dividend yield. When oil prices were going up, Linn looked like a sure thing. With oil prices in the dumps, however, it no longer looks that way.

The company's $0.24-per-share monthly dividend was cut to a dime just six months in to the oil-price decline. It was eliminated in October last year. This was most certainly the right decision for the company if it wanted to survive a brutal decline in oil prices. But Linn's shares have tumbled 95% since June 2014. That might get really aggressive investors interested in Linn's turnaround potential right now, but it isn't the kind of roller coaster ride I'd want to be on.

Staying power
That's why oil majors make more sense for me. That list, of course, extends well beyond Exxon to include names such as Chevron (CVX 1.91%) and Royal Dutch Shell (RDS.A) (RDS.B), two other names I was considering. All three offer up something I find incredibly attractive -- long operating histories. When a company's been around for 100 years or more, it has some experience working through difficult times.

That's part of the reason this trio, and the other oil majors, have diversified businesses scattered around the globe. When one area is weak, another can help to offset all or at least some of the pain. Exxon, Chevron, and Shell have all proved themselves through multiple downturns, and in the end, I was far more certain that these names would be around to see the eventual upturn than a company like Linn -- and that they would keep paying me dividends along the way. 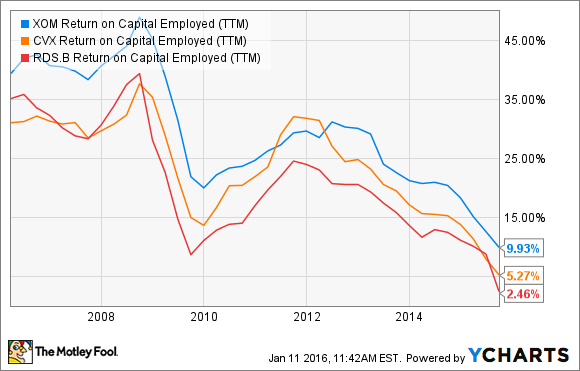 But why Exxon, the lowest yielding of the trio? I believe it's the best run oil company in the world. One of the easiest examples I can give is that Exxon's return on capital employed, essentially how effective management is at deploying capital, has consistently been above the returns Chevron and Shell have provided. Not every year, of course, but most.

And if you listen to the company's executives, you get the impression that execution is in the company's DNA. It isn't just about drilling for and processing oil and natural gas; it's about doing it better than anyone else in the world. That means a relentless focus on process, including indoctrinating employees in the Exxon way of doing things. That's how a company survives so long, and Exxon has put up the numbers to prove it's the industry leader.

Oil's not dead yet
So when Exxon's shares slipped to a 4% yield, something that hadn't happened since before turn of the century, I jumped. That said, I have some trepidation about the future of carbon-based fuels such as oil and natural gas. But I think there are at least a few decades of future ahead of Exxon before there's a real threat to its business.

Most of the gas-engine cars sold today are likely to still be on the road in a decade. And while the United States is working hard to clean up its economic footprint, many of the most important emerging markets are far behind. After all, if you don't have an electric grid reliable enough to power your home, how can you expect it to power your cars? Indeed, it's still hard to replace the potent combination of energy and portability that gasoline provides, particularly in nations moving swiftly up the socioeconomic ladder.

So I hope to own Exxon and collect my 4% yield for decades. With any luck I'll have the opportunity to pass it on to my daughter. And with an annualized dividend increase of around 10% over the past 10 years, I fully expect my dividend checks to keep up with inflation -- and then some.